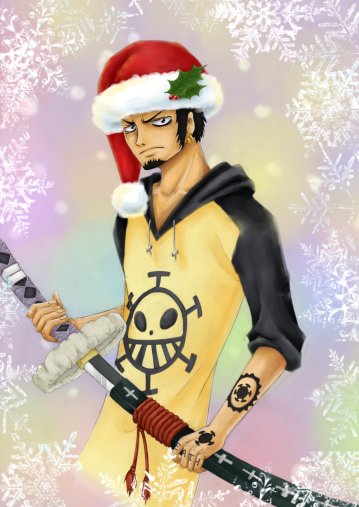 Wow! Four days have gone by already… Quite amazing… Time sure does fly when your blogging… Although it feels slow when you’re on a ‘no anime‘ fast. Haven’t watched anime for four days now. Sorry this is a bit late. I normally post this up on the night but last night was gym night and was too tired to move my arms after… Even typing becomes a chore after lifting weights.

Mind you, I’ve only started recently so its all new to me… Perhaps I can talk about my gym experiences on here… Now that’s a thought. Nerd in the Gym: My introduction to the world of Buff and Testosterone.

This also happened in the Punk Hazard arc and was probably as significant as Usopp’s burning down the World Government flag at Eniess Lobby. Maybe it wasn’t as dramatic but Law has set the spark for one of the largest scale wars amongst pirates and marines since Marineford. You see, in this whole plot that is setting out, he is the catalyst and this move is what set everything in motion.

It started with a one on one battle with Vergo as Smoker lay watching; defeated. Law showed us his strength and skill with beautiful movement and precise timing. It was just graceful how he waited for Vergo and then unsheathed his sword. Yeah, his Devil Fruit helped quite a bit but what he accomplished was truly catastrophic. Not only did he cut Vergo in half… He also cut the whole factory in half, which in process destroyed the SAD production. But that’s not all… His swing of the sword combined with his Devil Fruit ability was so powerful, it actually cut the whole island in two. My word… This guys is a beast! That swordsmanship combined with that fruit is a deadly combination.

He claimed in his speech that all the big forces have been sitting by idly, as if waiting for something huge to happen. Whitebeard ended that era and a new one is ready to begin. An era of the new generation… The Worst Generation!