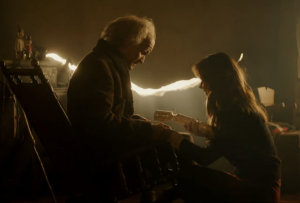 This truly was a beautiful scene, You get to witness The Doctor in a feeble & vulnerable state just before his final moments.  Superb acting from Matt Smith, you really get to feel the joy in The Doctors face when he sees Clara after so many years.   They share a christmas cracker and a piece of papers comes out, to which The Doctor gestures  “Is there a joke? huh? Is it a Knock-Knock one? Those are best.” Clara replies “I don’t think so.”  to which The Doctor eagerly responds “Well read it then, go on.”

…And now its time for One last bow.

Eleventh’s hour is over now.

The clock is striking twelve’s.” 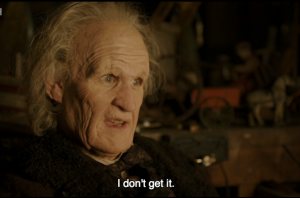 Don’t we all want a grandpa like that!
Perhaps the knock-knock joke The Doctor had in mind was…

I don’t intend to reveal anything in this blog, going to do my best not to, because this is a episode to watch.  It was Matt’s best performance and in the tone of the 10th Doctor HE WAS “BRILLIANT!”

After watching the 50th anniversary episode i felt a great deal of joy! I was SUPER proud of the The Doctors and the same time immensely happy.  Just look at his face at the end of the episode, this was a facial expression i have never seen.

Just didn’t seem fair, but from a actors perceptive there isn’t a better time to leave i think, draw the curtains whilst your still GREAT!

Watching The 11th Doctor hallucinate as he regenerate was heartbreaking =( 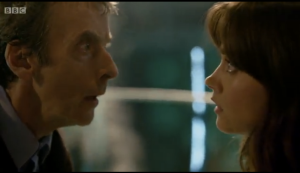 I really wanted to PUNCH him in the face!

I know in time I’m going to love him, but right now i hate him!

2 thoughts on “Extracts from “Thoughts on a Clock…”