I don’t even know what to say…

It is a great honour to accept this… Thank you Sky Corps for nominating me for the Liebster Award. I don’t know what to say… This goes out to all my wonderful…

Didn’t I mention something about accepting awards and how I feel many actors deliver fake speeches about being honoured? I did as well, right here.

But yeah… I am grateful to all the support I have received from the ani-blogging community who have allowed me to become a part of them and have helped me out on every opportunity I have asked.

So what is the Liebster Award?

It’s an award given to upcoming blogs that have less than 200 followers. It’s a bit of a Rookie of the Year award.

I really like the word Rookie… Makes me feel like I’ve got potential… And the word ‘potential’ reminds me of my science lessons in high-school… “Potential energy becomes kinetic energy.” I always imagined standing on top of a waterfall with all this energy and as soon as I fall over, all this energy is released into the atmosphere as if I were some kind of Super Saiyan.

Yeah, I was a total geek even back then… That’s how I managed to understand science… using my imagination.

Here are the official rules of the Liebster Award:

The Liebster award is intended to give some exposure to small blogs with less than 200 followers. The rules are as follows:

1: When and why did you start blogging?

I started blogging on the 20th of November… It was a random occurrence. I think I just stumbled across it one day out of random. I don’t even remember it too well. Next thing I knew, I was making a blog.

2: Do you let your family know about your blog?

Yes, I let me mom know as she knows I’ve got a passion for writing and it pleases he r to know that I am following my passion. She encourages me to do so. Yeah, my mom is pretty awesome!

3: If you watch anime, what is your favorite anime, and why?

One Piece is my favourite anime because it is absolutely awesome. I could spend the whole day telling you all the reasons why but we don’t have time for that right now. Let’s just say, it has awoken a new me from inside of me and I live for One Piece.

4: If you could have any car, what would it be?

Chevy Impala 1967… That is the car that Dean Winchester from Supernatural drives and I fell in love with that car.

5: If you had a time machine, what would you use it for?

I would use it for my own amusement. To learn about the past and see the future. To stop certain horrible events from taking place and make the world a better place.

6: Do you have a girlfriend or boyfriend, if so what do you like most about them?

I just got married… but that still counts right? I love her personality, her caring nature and obviously her love for me.

7: Have you ever been to Canada?

9: If you could solve only one problem in the world today, what would it be and why?

War! I would like there to be world peace. If I could solve one problem, that’s what it would be. There are obviously many problems that I would like to take care of but that’s the first that comes to mind.

10: When you’re going through a really rough time in life, how do you cope with it so you can move on with things?

11: Why is Batman the best superhero of all time? Explain.

Because he’s Batman! No Explanation required! 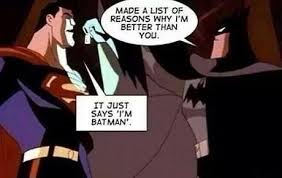 They were some awesome questions Sky Corps. I really enjoyed answering them. Thanks once again for the nomination!

So now I guess it my turn to nominate some dudes and dudettes for this award. If you have more than 200 Followers… My bad. I honestly don’t know so I’m just picking a few who I think are pretty cool and have quite young in their journeys.

Have fun guys and all the best with the questions…

Standing on my Neck

‘Will of D’ Manga Reviewer

I know I’m supposed to do 11 but this is really difficult because most of the blogs that I follow either have already been nominated or have been around for a while. So I’ll stick with 8 as well like Sky Corps.
My Questions for you guys are: