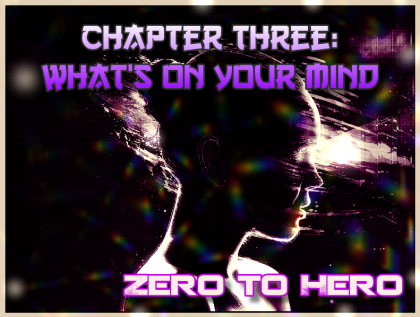 So I’m a bit late on the third day of ZERO to HERO but the fourth challenge hasn’t been posted yet so I’m still in time. I try to be punctual all the time. I hate being late. But I’m also the type of guy who does everything in the last minute… just because it’s an option.

Today’s assignment: write the post that was on your mind when you decided to start a blog.

Hmmm… That might be a bit difficult. My memory isn’t so good when it comes to such things. I don’t even know if I had such a post on my mind. I don’t even know what was truly going on in my head. It was a bit of a blur. All I knew was that I had found a treasure map. Well not literally a treasure map but as in a metaphor. I knew I was on to something big here; something that could change my life.

Think you stupid genius of a brain… Think back to the 20th of November. What was going inside that mush of yours that made me start blogging? What was I inspired by?

I know it has something to do with Wattpad. I had recently begun writing stuff on Wattpad and I was planning to… I was planning to write manga and anime reviews so that I could get more viewers. I had realised there was a very active anime fandom on Wattpad and I thought this might appeal to them. However, Wattpad was hardly the base for writing reviews. It was more for writing stories.

I think that’s how I must have stumbled upon WordPress and blogging. I was probably searching for some reviews to read so that I can get the hang of reviewing.

To be completely honest with you, I don’t remember what it was exactly but this story seems to make a lot of sense.

It must have been because the day after I started my blog, after a couple of trial posts, I finally posted something of actual worth and it was a review of One Piece Chapter #729.

It all makes sense now. I’m no Sherlock. I’m not even on Dr. John H. Watson’s level but I think I’ve cracked this case.

Now that it has been solved we can move on.

What? Is that it?

But… but… I haven’t written enough. I’m not satisfied with this. I must write more.

I guess it is enough. Not everybody likes reading word after word. Sometimes short and to the point is the ideal way.