Hey guys. I’m Haunting-Lime but you can call me Lime.

This is my first ever blog post so go easy on me….. please.

From my vast array of interests which we will discuss on a later date; Today I want to talk to you about Naruto!

I was a die hard Naruto fan until a good friend of mine (Shaki) introduced me to the world of ONE PIECE!!! But I couldn’t just abandon my love for the epicness of Naruto. After all it was my gateway drug to the anime world.

((Lets get things started with an apology… I’m really sorry for getting this review out late but on the bright-side I got a lot of things done :P))

The chapter starts off by Confirming the Death of Naruto……….. and the demise of the Shinobi World. 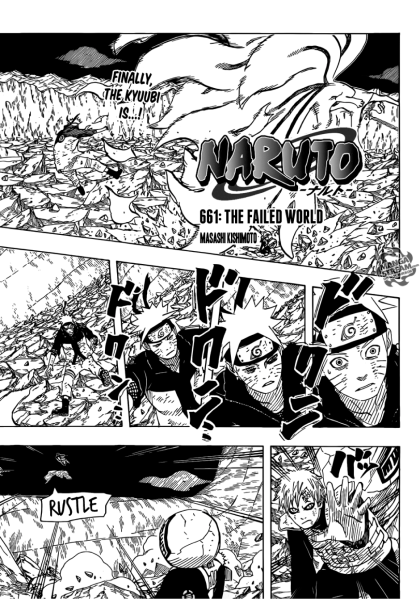 Just Kidding, Naruto’s Uzamaki bloodline wont let that happen but Bee on the other hand is a good as dead… ☹. 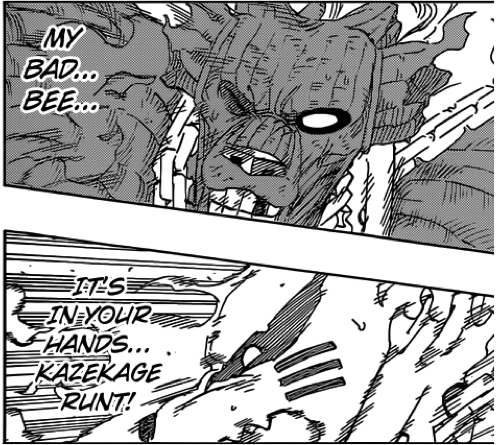 The Hachibi’s final words to Bee make me really, really sad. I love Killer Bee and I really hope that Kishimoto keeps him alive. I hope Bee comes back with some major significance because as it stands, Bee has been severely overshadowed by his comrade Naruto in this war.

Its also pretty obvious that, Karuma asked Gaara to rush Naruto to the other half of his chakra. With that it should revive Naruto and give him a fighting chance against the unbeatable MADara Uchiha.

But in all seriousness

HOW THE F*** is Naruto going to defeat Uchiha Madara? He is soooooo OP that he made Obito’s efforts look like trash.

Even the fodder Zetsu cant help but make a mockery of Obito.

Madara puts the white trash in its place by calling Zetsu a “reject from a failed experiment”.

Aghhhhh!!! Madara is such a badass and Kishimoto shows him effortlessly taking out Tobirama in the next few panels.

A great bit of fan service for all the Madara fanboys and fangirls out there.

I myself am loving the MAD(ara)NESS.

As we move further down the panal, Madara reveals a potential wtf power-up in the form of a new eye or as the next panal showed , he’s eyeing Sasuke’s luscious eye’s.

Only time will tell what the mad man is up to but it does make me wonder as “Nurturing” is an intriguing word to say the least.

As the chapter progresses we find Hashirama completely immobilized or “fucked up” for short. He seeks the help of Sasuke.
To his surprise the first Hokage needs his help out of all people.

“I find that surprising too” apparently Sasuke reminds Hashirama of Uchiha Izuna.

Am I the only one who finds this ironic, the only other Uchiha alive resembles the Antagonists brother.

Talk about obvious plot device to get the flash backs rolling.

But upon further reflection this was desperately needed, as we might actually get to see what drove Madara to the level of insanity.

Also it makes a welcomed change from all the action, action and you guessed it action! we’ve been getting for the past, god knows how many months.

Don’t get me wrong I love action, I love it… but I also love the character progression and the story. I feel as Naruto might have just take a turn for the better but lets wait and see what Kishimoto does.

Going back to Hashirama, I seriously think he needs to give up on bringing back the good Madara he once knew as Madara will never change and if Kishi pulls another Nagato here…

I will KILL MYSELF!!!

Seriously Madara has done soo much, there’s no room for change so Hashirama should abandon the non psychical approach. 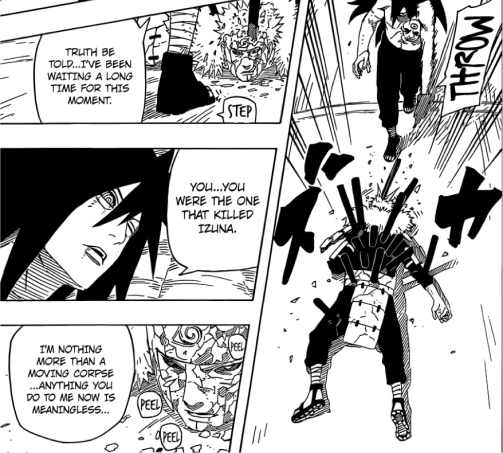 Even in the face of defeat Tobirama knows how to keep his cool and truly troll his opponent. “What a badass” he really know how to wind up Madara.

So in the end Hashirama gives Sasuke a new jutsu.

What does he go and do… gets himself stabbed. HAHAHAHA props to Madara it was quite unexpected and kind of satisfying.

HONESTLY Madara if you’re going to try and sacrifice Sasuke, do it right… the heart is to  the centre.

So for anyone who thinks Sasuke bit the dust before Sakura well you are sadly mistaken.

One can only hope though when sakura comes to heal her love interest, Madara might actually might do us all a favour and get rid of that useless character….. hmmm anything is possible hahaha just so you know I don’t hate Sakura but where the hell is she everybody else Is busting their lives and she’s just hiding away.

Well what’s more interesting is what could this new justu be?

Is it a healing technique or is it a plot device to give Sasuke Rinnegin power up?
I personally think its some sort of wood style binding jutsu but it could be anything.

I personally can’t wait to see the relationship between Uchiha Madara and Uchiha Izuna unravel in the next few chapters.

Let me know your thoughts guys and thanks for reading ☺

Cya till the next one.