Monolith and Warner Bros have combined their efforts and forged a game based in Lord Of The Rings: Middle Earth.

It can be seen that similarities appear present but is that truly a bad thing?

I’m a firm believer of building on what foundations have been laid before, and this game has potential to do so. Why does it have potential because the two games it has been likened to are the Assassin’s Creed series and the Batman Arkham series (which I have already expressed my view on). 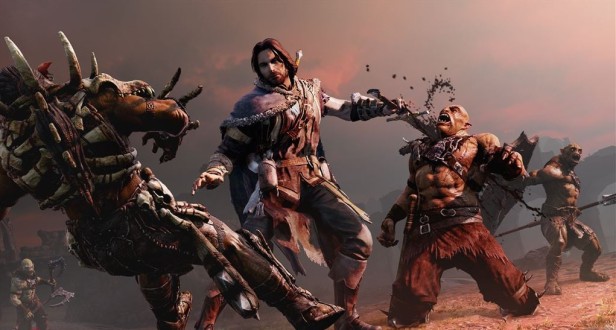 We are Talion a ranger of Gondor who has been embodied by a Wraith. His family murdered, his loved ones desecrated. With the will of revenge he plans the journey.

Talion has the ability to use the wraith to bend the intentions of weaker enemies. This power alone gives the player the power allowing him either to create havoc or to strategically plan his next move. As with all good trailers some details should be hidden and granting the player some use of imagination. There apparently is a levelling system which could mean there are additional powers or upgrades.

There is a system in the game that develops the enemies you fight and each enemy is unique in his own way. So these orcs and goblins have names and personalities and they will change roles and treat you differently depending on the previous encounters you have had. Some may hate you with a passion, others may be afraid of you.

There is a 8 minute clip to enjoy below. I hope you enjoy it as much as I do. There are complaints that the lore is not followed exactly in this story but hey, Tolkien left us a long time ago. There is nothing wrong with adding a few things here and there to produce an awesome game out of it.

I very rarely get excited over trailer and game play videos but there is something special in this one.

5 thoughts on “Shadow of Mordor – A Preview”