Magi: The Labyrinth of Magic is a manga series I picked up fairly recently having watched the first season of the anime (which is, itself, really good). I was hooked initially by its Arabian Nights vibe, and it has quickly become one of my favourite reads. I’ll be reviewing the series here on Sleeping Geeks but first (pretty much as I did for The Seven Deadly Sins recently…) I’ll be offering a bit of an introduction to the series and trying to explain why – if you aren’t already – you should watch/read this series!

A World of Magic.

Magi tells the story of Aladdin (no, not the one with the lamp… this one has a flute 😀 ), a peculiar little boy who is friends with a djiin (a genie). Ok, so far so Disney, I admit, but wait! Magi is no children’s tale: it’s a dark and complex story, set in a world which really feels alive with political intrigue, wars and ridiculously poweful heroes clattering each other about with some crazy abilities.

But back to Aladdin. He’s a magi, one of five who with the power to commune with the Rukh (a sort of chakra for this world, to put it in Naruto terms). They are phenomenally powerful, though Aladdin remains a novice when compared to his four compatriots (all mysterious figures, at the start of the series…)

Above all else, though, the magi exist to create labyrinths. 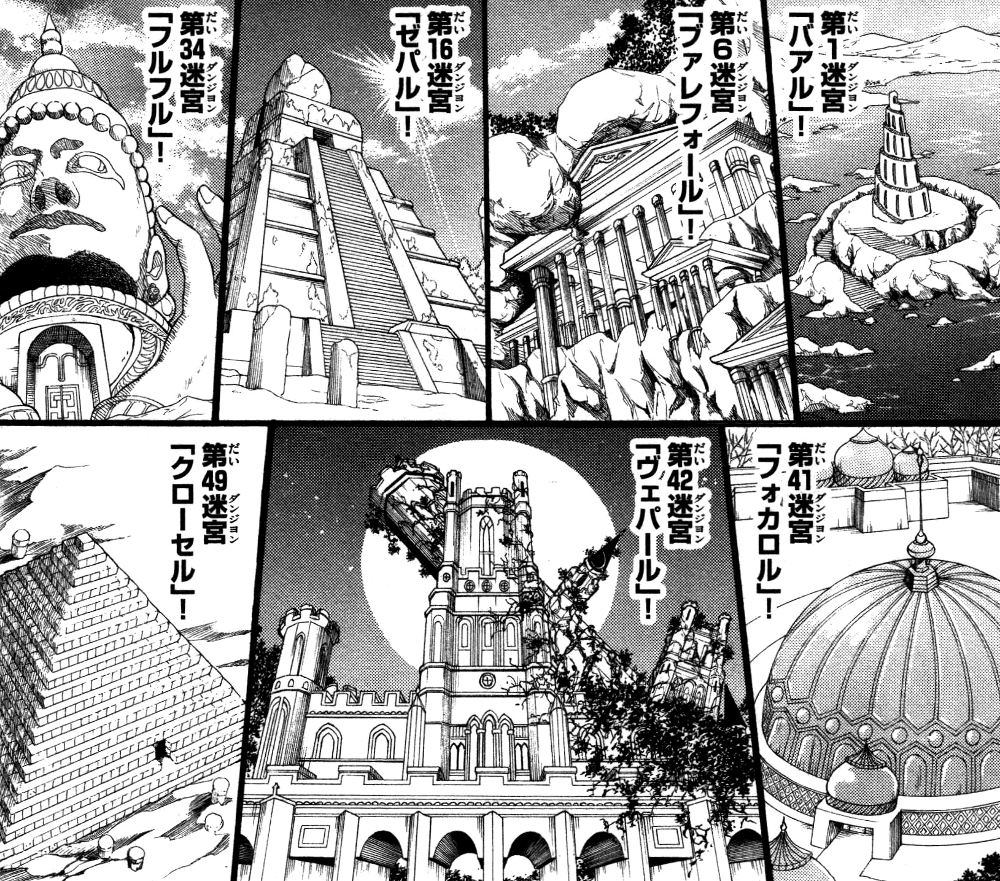 When it comes to Labyrinths, apparently size really matters…

These massive structures serve as conduits to another world, and those that can traverse them return with a formidable new power: a djinn, the labyrinth’s resident, bound to their will. It is from the labyrinths that the major supernatural element of the series comes: through equipping a djinn residing in a personal item, a dungeon captor (as they are called) becomes a near-god- like force of nature.

Sinbad: A man of many Djinn.

Little Aladdin has yet to create a labyrinth of his own, but he has aided another to conquer one: Alibaba, a young vagabond with a noble lineage. In doing so, Alibaba has won the right to wield a djinn, and Aladdin has gained a King candidate – one to support and promote within the Magi world’s complex political landscape.

The Kings of Magi

Confused..? Well, I don’t blame you. The world of Magi is a multi-layered place, and the multiple factions/characters – a lot of whom are the aforementioned dungeon captors – do make the series heavy going at times. Let me try and break it down.

Essentially, the Magi world is broken down into a number of major factions, and each has a king or leader. In the dark and distant past, one great king (Solomon) ruled over everything (although even this is history is murky…) and the Magi serve essentially as selectors for potential great kings to follow in his stead. Alibaba, having passed a Magi’s test in surviving a dungeon and winning a djinn, is Aladdin’s candidate for such a role; similarly there are others for his fellow Magi, among the factions of the world, and they play a significant part in the plot as it develops for both good and evil.

Alibaba: the boy who would be king (with a Magi’s help, of course..)

OK… Even if you haven’t, don’t worry: most of this is simply ancillary world-building, a frame upon which to construct the actual elements of the story. As with most anime/manga, the amazing scope of the story is relatively easy to comprehend when absorbed through the general story: watch or read Magi, and you’ll be reeling off the names of those kings, their magi and their households (followers who share their powers) as easily as you can name all the Akatsuki or the Gotei 13, I promise (although I still struggle with the latter, to be fair…).

So why should you watch/read?

Magi is somewhat denser than many mainstream shonen, but that is actually a strength, in my opinion. The story begins simple: boy wants to capture dungeon; mysterious chibi-like figure (Aladdin) helps him. Pretty soon, though, you’re drawn into a world whose history and distinct factions feel incredibly well-formed and well-balanced that often choosing a side is quite tricky!

But it’s not just about plot, oh hells no. There is so much history and intrigue in play here, and real moral questions posed, that it would be easy to forget that Magi is also an absolute peach of an action series.The second series of the anime (currently airing) looks down-right breath-taking at times, and they’ve barely even scratched the surface of what is to come in terms of the series battles. It takes a little bit of time to get going, sure, but when it does, Magi really ramps up the action to near Dragonball levels of insanity. Enough said.

Magi’s cast also features some really heavy-hitters, sure to become some of your favourites in all of Otaku-dom. Aldaddin and Alibaba are both great as somewhat naive and hopeful guys in an often brutal world (and they kick some serious ass);

the villains are fantastic, from the Magi Judar – Aladdin’s dark counterpart – to the tragic Matel Mogamett (he’s a sort of genocidal Dumbledore…) – and the awe-inspiring Ren Kouen (the guy is unstoppable, unflappable and undeniably, unbelievably cool…)
.

I mean seriously, look at these two… Kouen and Morgiana certainly prove that in the world of Magi, redheads are damned scary.

If I had to give you one reason to watch/read, though, only one name would be required.

And that name is:

Where to begin? Sinbad is the greatest hero in Magi’s world, having conquered SEVEN dungeons, he’s cool in that goofy, Jiraiya/Shunsui Kyōraku sort of way, he leads the Seven Seas alliance, whose members are absolute beasts, and his design is awesome.

What makes Sinbad so noteworthy, though, is his morality. The guy is (increasingly) more than a little shady, despite his legendary facade, and really makes you wonder whether he can be trusted in the long run. In short, he’s would be an amazing addition to any manga’s roster, and completely steals the show here. If no reason than that, go read Magi. I dare you not to fall completely in love with this rougeish hero with a darker-than-black soul. Or, at least, I think so – others might argue that he’s all fairies and stardust. But that’s the beauty of fandom, eh?

So there you have it: Magi is an intelligent, character driven manga about guys smashing each other over the head with mountains (pretty much). Go watch and read! I guarantee you’ll love it as much as I do.

5 thoughts on “Magi: The Labyrinth of Magic – An Introduction”