Anime for 2014 has been rather dull. Nothing has grabbed my own attention apart from Nobunaga the Fool. I was simply curious about this anime so I went ahead and watched the few episodes that had been released. If there’s something I can give the anime credit to it is that it is certainly bold. However when I say that it is bold I am talking about how absurd it is.

Let me give you a rundown of the cast. Jeanne (Joan I will assume) of Arc, Leonardo Da Vinci, King Arthur, Julius Caesar and Oda Nobunaga. I have only seen three episodes and the absurdity is through the roof. Is this bad? I’d personally say no as stupid shows with no logic can be incredibly fun such as Gurren Lagaan.

I find it incredibly amusing as this is the writers’ way of saying to us, “Just ‘because we can.” Despite the ridiculous names the cast. The actual characters I have to say are rather bland and boring with only Oda Nobunaga himself striking out as any sort interesting character. He is quite simply a fool but his character is incredibly likeable and can be easily compared to be similar to the likes of Kamina from Gurren Lagaan. However as this is just the introduction of the anime there is plenty time for the characters to develop. Hopefully the characters will later turn into particular cool stuff otherwise the anime will be lacking in one of the most important departments.

Story wise it is lacking and the best way to describe this is basically, take all of the western world and chuck it on a planet while taking the eastern world and chucking that on another planet. The story goes on with the “chosen one” who can pilot the great machine and so begins Nobunaga the Fool which follows Nobunaga in his conquest. While the idea sounds good it seems to be rather executed poorly with the story so far coming off as bland. However the story is not the focus so I am not expecting too much out of it but hopefully that may change. 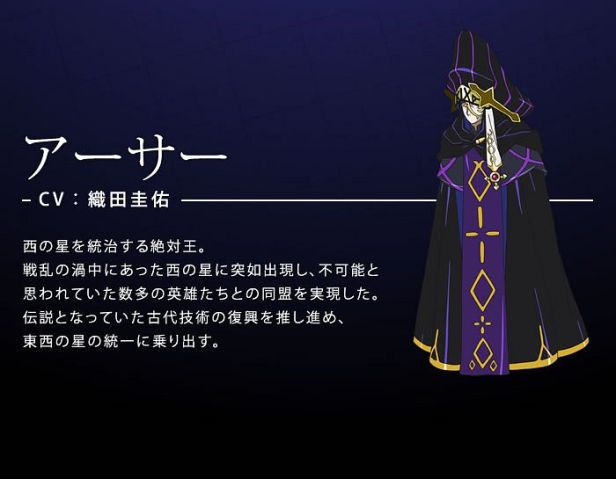 Ladies and Gentleman you are looking at King Arthur.

The anime is definitely not taking itself seriously with the names of historical figures so easily tossed about. The story itself serves an excuse for the mecha action. Animation wise the show looks average however the mecha designs look fantastic and are one of the highlights of this series no doubt. The art style is the typical anime look and feel that we know where nothing stands out about it. The action scenes are well animated but I’m hoping for a bit more but they also feel a tad generic while leaving something to be desired. The music as well is bland where it’s just there. No tracks so far have impressed me since I am a lover of soundtracks.

This really happened but why the need for swords if you have giant robots. Guess its just symbolism as always.

Nobunaga the Fool is an anime that is screaming mediocrity. However the fun absurdity of the cast and a strong lead protagonist are its strong points which kept me watching. However it’s negative are just as abundant as its positives, boring and bland characters with no vibe along with average animation and music. I will continue to watch this show and see how the characters develop and if the music starts to have more oomph in them.

If you’re looking for a blast I recommend you check this out even though it’s still airing however be ready for its mediocrity although it may improve. As interesting and absurd as it is, it can be rather dull and boring. If you do watch this anime just be prepared. However with this much potential we might possibly have the next Gurren Lagaan.

I will be watching the rest of this anime and see how it turns out. I have hoped that this will turn out into something wicked. Expect a review for this whenever this anime decides to finish.