I know I am late to the new season of Avatar: Legend of Korra but better late than never right? I heard a fourth season was coming soon and realised I had actually missed out on the complete season 3. In preparation for the new season, I’ll be watching Book 3 and reviewing the episodes on a fairly regular basis.

Book 3 is titled as “CHANGE” which makes absolute sense. You see, with the harmonic convergence having taken place, the spirits are now living within the human world now. There is no parallel universe anymore. It is all one, just like it was during the lifetime of Avatar Wan; the First Avatar.

EPISODE 1: A BREATH OF FRESH AIR

They could have not picked a better title for the first chapter. Something unexpected happens right at the start of this chapter. Buumi learns to Air-Bend. That’s right. Buumi is now an AIR-BENDER! How frickin’ awesome is that? I love the guy and now he has special bending powers like his siblings.

This came out of the blue but it happened when he felt he was in danger. The poor oldie is having trouble using his new found powers as they only seem to present themselves in times of danger. Although a plate thrown at your head wouldn’t classify as danger in my book, although I guess having a nephew like Meelo can lead to frightening experiences.

I found it quite hilarious that they didn’t initially believe him considering what a whacky guy he generally is but the faces they made when they realised he could were priceless.

This is what I love about Avatar. Always expect the unexpected with the plot-line. It never stops entertaining.

So the current happenings of Republic City are not very good. The whole city is covered in vines and the citizens are having trouble coping. Most people blame Avatar Korra, which I must agree with, is kinda her fault. Well, she has to take responsibility for it. She did after all, open the frickin’ portal without thinking it over. 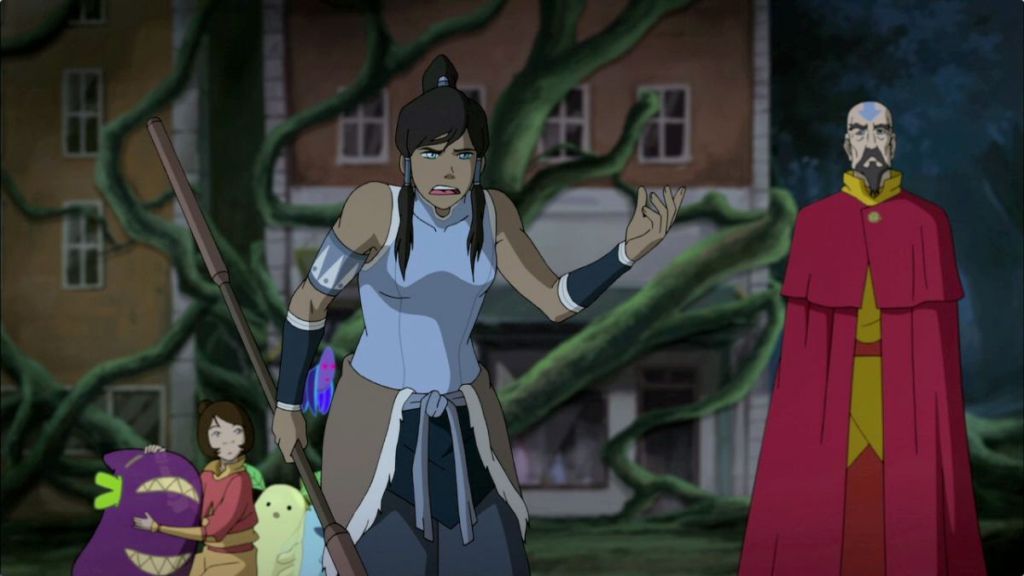 Well anyhow, she and the president are on opposing sides now and things are looking tense. Korra got kicked out of the city. A wise move from the president considering she is probably the only person who can actually fix this mess.

Other than that, other air-benders have seemed to awaken. The world seems to be restoring balance by creating new air benders. This does kind of make sense… but makes it very dangerous.

Tenzin and Korra seem to think of it as an adventure.

Some random guy discovered his powers and went hysterical whilst some philosophical prisoner managed to use it to escape his prison.

I reckon this Zaheer guy is the new antagonist for this season considering he plans on ending the White Lotus and the Avatar. This should definitely be interesting because I already like his character.

Mako is still his broody self, working hard for the police department. However, the bonding of his two ex-girlfriends seems to make him uncomfortable. As a guy, I can clearly understand this situation. Nobody would be quite comfortable with it.

Although I wouldn’t exactly call this bonding…

Bolin is still enjoyable with his weird comedy style. I just hope we get more character development this season.

I think I’m going to enjoy watching and reviewing Book 3.

This Episode gets a solid 8/10 from me; a great start to a new, interesting journey.