Hey guys, this is Bronze Panic bringing you another Team of the week from this weeks Barclay’s Premier League action.

After the conclusion of Week 7 of the BPL here are my picks: 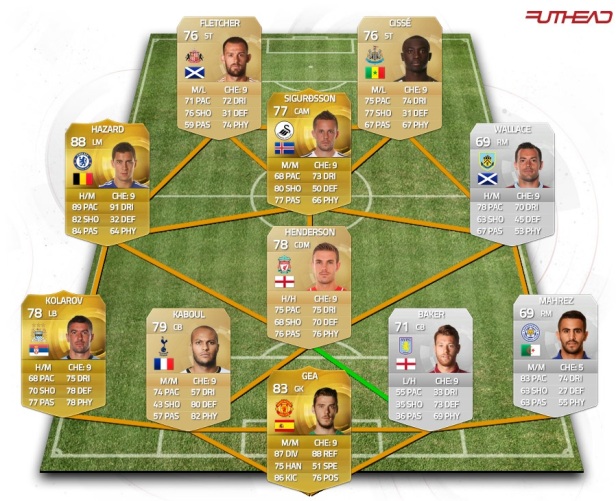 David De Gea had a very quiet first half facing Everton. As the second half progressed Manchester United where holding on with just a goal in front. De Gea proved the difference with some spectacular stops, saving face for United.

Nathan Baker was instrumental in the 80 minute vigil against Man Cities relentless attacks. The final ten minutes where the difference between the two sides as Yaya Toure netted his first goal of the season followed by a powerful shot by Aguero with the final score settling at 2:0

Younes Kaboul was the rock for Spurs at the back. There was a controversial red card decision which went in his favour. He kept Southampton forwards at bay maintaining the goal which was netted by Christian Eriksen.

Aleksandar Kolarov was the only spark in the first half against Aston Villa. His direct runs and powerful shots almost put Man city in the lead. Overall very good game for the full back.

Riyad Mahrez was Leicester play maker in this weeks clash against fellow promoted Burnley. He was direct, took on players, ran into space and created chances. Very positive performance this week, not to forget bagging a goal for himself also.

Jordan Henderson was the difference between the two sides as Liverpool met West Brom at home. Assisting Lallana to his first goal just before half time. After half time the baggies came out swinging as Berahino won a controversial penalty. Not 6 minutes later, Sterling found Henderson, who drove the ball home for the winner.

Eden Hazard as ever was comfortable on the ball, picking passes and making runs. His direct run past several reds forced a last ditch tackle from Koscielny earning him a penalty which he gleefully took. Arsenal players just didn’t turn up.

Gylfi Sigurdsson had an amazing performance against Newcastle as he found space and picked beautiful passes. This admirable skill of his added 2 more assists as his side fought for victory. Definitely enjoying his role at Swansea better than Spurs.

Ross Wallace made my team of the week after scoring a 95th free kick to level the score at 2:2. This was a tough pick but I think Wallace edged out Newcastle’s Gabriel Obertan just because of the fact it was the last chance to level the score. Fantastic free kick lad!

Steven Fletcher had an unbelievable recall as he featured in all three goals against Stoke this week. Firstly assisting Wickham with a crafted cross and then netting two of his own. His performance led Sunderland to their first win of the season.

Papiss Cisse showed that the players still wanted Alan Pardew as their manager as they clawed to a draw against a sharp Swansea team. Finishing the two clear chances that he got allowed Newcastle to stop the rot and hopefully win against newly promoted Leicester next week.

The premier league entertains us week on week and this week was no different. We all love players showing passion on the field but this week two old men on the sidelines let their emotions get the better of them. Blues v Reds, as Wenger took on Mourinho. These two have bad blood, which escalated at the technical areas as Wengar pushed Mourinho. The blue manager had the last laugh as they took all three points.