Today’s DAILY PROMPT was all about Tattoos.

Do you have a tattoo? If so, what’s the story behind your ink? If you don’t have a tattoo, what might you consider getting emblazoned on you skin?

I admire ‘Art’ and tattoos are a form of art; it’s a form of expression. Just like people dye their hair or pierce their eye-brows, it’s just a way of expressing your outer-self based on what you like and prefer. Sometimes that’s not the case when you are pressured into changing your body to a certain way by society but more often than not, it’s a personal choice.

I have always thought what it would be like getting a tattoo. My beliefs don’t allow me to permanently mark my skin with ink so it’s a personal decision not to get one but knowing my personality, I would most likely regret the decision sooner or later. A temporary tattoo I wouldn’t mind. Like let’s say it was a contract that would end in a year or so, I could totally do with that, I just happen to know that even though I won’t think much about it, a permanent tattoo on my body would at some point come back to haunt me.

Having said that, this post is about what I would ink myself with if I were to get a tattoo. If I were to get a tattoo, it would have to be something very important or close to my heart. I would mark important events in my life with ink that would help me remember those events. This could be the birth of a child or the loss of a loved one. I would also add things that I am psychologically invested in that have had a huge impact on my life. This would most likely be geek related. So it could a symbol from an anime or comic.

The art-work would have to be immaculate and I would only rely on the greatest of tattoo artists to burn ink on my body.

I don’t think I would tattoo my whole body though, just small area’s here and there. I would not ink the whole way down my arms or legs.

If I were to ever get a tattoo, it would be the one below. I would modify it ever so slightly by placing an X through the A rather than the S. This would be in the memory of a lost friend. 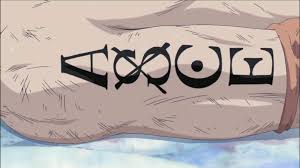