Are you patriotic? What does being patriotic mean to you?

Patriotism is an interesting topic for me. You see I have two nationalities considering my grandparent’s migrated to the country of my birth. Therefore I am branded as a British-Pakistani but to me, it is but that… a brand.

I used to feel pride associated with my country of origin and I later realised the whole concept was outright stupid. Just because we were born in a different region in the world, doesn’t make me any better or worse than anybody else in the world.

This world doesn’t belong to anyone… It belongs to everyone. The whole idea that a whole country belongs to a certain group of people doesn’t really sit well with me.

The only thing I have that is my own is my beliefs. That’s what makes me who I am. Where I was born or the culture and tradition of my parents doesn’t really mean a thing. It’s only a means to brand us and segregate us from uniting as human beings. 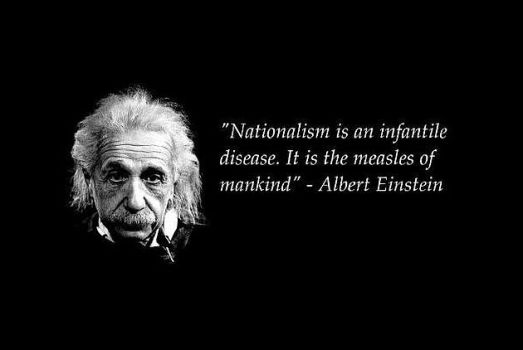 Why is it that when something goes wrong in your nation or some people from your country or race are hurt, you feel it but yet when another human being, who just happens to be from a different part of the world with different skin colour and you are immune to their suffering.

I have noticed this time and time again based on the media and humans have become desensitized because they feel only certain lives are important and the rest aren’t as valuable. All lives are equal and all lives matter. Patriotism only exists because we created it.

What right do I have of taking pride about some war that took place decades ago? If the Germans won WW1 or WW2, I’m pretty sure the country would be proud of the Nazi regime and hailed Hitler as a hero.

There is no justice in war as whoever wins becomes the justice. We kill in the name of our country, fighting over the rights to a piece of land. You call that a heroic act because it was done for patriotism?

Imagine if my neighbour and I had dispute over a piece of land between our houses and I killed the guy, I’m pretty sure my kids are not going to be proud of me. They’ll think I was a nutter. It’s the same concept in my opinion.

Patriotism is a whole bunch of balonies. Should someone attack your home, you have every right of defending it. That does not mean you start to think highly of yourself because of the house your parents left you.

The whole idea of hating someone because they were born in a certain country, based on the actions of that country’s government, is a ridiculous notion. That individual has done nothing to harm you in anyway yet you will hate him? Maybe someone from your nation has hurt this man, does it give him the right to hate you? No, not really because that is completely illogical.

I guess this has become somewhat of a rant. I apologize for any feelings hurt but this is just my honest opinion. We need to eradicate nationalism and patriotism from our lives for this world to unite and see peace.

7 thoughts on “Why Patriotism is Wrong”