Capaldi is really seizing his role this season. The story kicks off with the first episode introducing one of the Doctors greatest enemies in the most vulnerable moments of his life and how the Doctor teaches mercy to the most ruthless killers in the Universe. Once again showing us the great man the Doctor is. Many more linked episodes (barring one) in this season, lots of cliff hangers which wasn’t too bad if you waited a few weeks to watch them all together, but come on who here didn’t watch the episodes the day it aired! 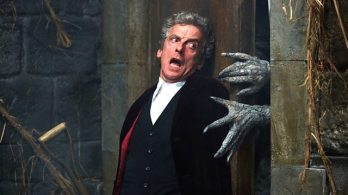 It was definitely more of a dangerous run, as this partnership of Doctor and companion take greater risks, most likely due to the fact of what they have both lost and just how much it takes for them to feel alive. Don’t we all wish the Doctor would come and take us away but that’s a post for another day.

This season has definitely been another good one, introducing new monsters and not forgetting the old ones. Though I personally liked the writing of the stories in the last season a little better. As we knew it was Capaldis’ first season so the Doctor and Clara would be getting to know each other and there was no question of whether Clara would be leaving. But with this season we all knew that Clara would be leaving us and there was that constant fear of ‘will it be this episode.’ The whole thing had a touch and go feel to it and to be honest it does get a little tiring but also when the inevitable does happen, you don’t expect it.

He makes someone immortal in this series, I won’t say who but truly immortal and making it look pretty easy to do. The Zygon episodes were well written and the Doctors words on war and violence were definitely the best of the season and wise words for the time we are currently living in.

The final three episodes were a continuation of the same story but in an almost confusing way. I have to ask, who was hoping in ‘Face the Raven’ they had stumbled across Diagon Alley? No..?

Keeping it spoiler free, mostly.. ‘Face the Raven’ was a sad episode, the last three episodes in general were quite sad, as they do tend to get towards the end of the season.

Finally, I LOVE Doctor Who.. But I was left impressed and unimpressed with the end of the season. The idea that one forgets the other is definitely a good one, no complaints there. Gallifrey is back! Woohoo! So the Doctor is no longer the last of the time lords.. fine, I can live with that. But the fact that there is now an immortal who is technically completely immortal unlike the Timelords who have a finite number of lives. The field medkit was used on a human, this ‘character’ was also there at the end of all things. That’s same medkit was used on another character too, where was he/she/it?

Not to mention two non time lords nicked a TARDIS from Gallifrey!

What happened to needing SIX time lords to pilot a TARDIS. The exception being the Doctor because the Doctor is freakin exceptional!

So yeh, that’s my only qualm with the season ending. It just takes away from the exclusivity of travelling with the Doctor and who doesn’t dream of doing that one day.