Hey guys, sorry for hardly posting but IM BACK!! Since 2015 is now coming to an end, I decided to make my very own wait for it *drum roll*………. TOP  10 MUST WATCH KOREAN DRAMAS by your one and only DefiantGlow. This is based on my own opinion, I apologise if this is not to your taste but I do hope you enjoy reading this.

Also check out my TOP 10 KOREAN DRAMA’s of ALL TIME!

Synopsis: Jang Yoon-Ha is the youngest daughter of a chaebol. However she dislikes being treated all special and wants people to like her for herself. Yoon Ha has a part time job where she has hidden her identity and attempts to find a man that will love her.

My Opinion: Just to let you know the “second” couple in here are extremely cute and adorable. Their story is just humorous and loving. I also really enjoyed this drama as it was different to others. The main girl being a chaebol? That is definitely rare.

Synopsis: When you go from the top of the pecking order in the looks department in high school and then fall to the bottom in adulthood, is it possible to get back on top? Kang Joo Eun (Shin Min Ah) was envied by every girl and desired by every boy in high school because of her pretty face and killer figure. However that changes when she finally becomes an adult as she is now overweight and is ignored by her co-workers. Coincidentally she meets Kim Yeong Ho, who is a celebrity personal trainer in hiding. Can Yeong Hoo help her regain her former looks?

My Opinion: This drama is absolutely amazing. I mean come on, its starring Min Ah- the most beHIDINautiful women alive. She is like my favourite actress. Oh and Henry is also featuring in it and let me tell you he is hilarious and also so cute.

Synopsis: This drama is about a serial killer who strikes women who have quite similar appearances. Lee Hyun is a genius criminal profiler who also has a degree in criminal psychology. The serial killer seems to be sending Lee Hyun a personal message. Hyun has had an unforgettable childhood and wonders if it was the crazy “monster” who he men when a kid that killed his father and who also was responsible for his younger brothers disappearance. Ji An is lee hyun colleague, who also had a child hood crush on him. As he has forgotten about her, she tries her best to discover the truth with Hyun.

My Opinion: I must say that the mystery was what drew me in as it was quite alluring as pieces of the puzzle started to join. Also can I add that D.O of EXO is in it and can I say he has such an amazing character- something completely different to the real D.O. 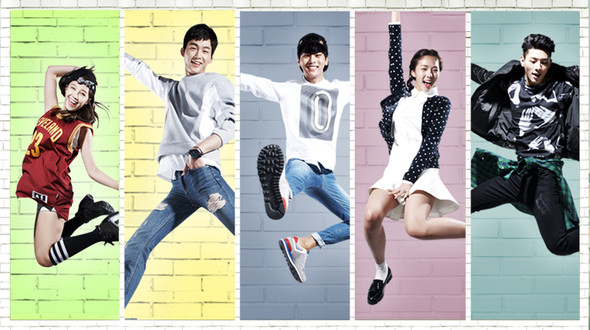 Synopsis: This drama is about a highly competitive school that cares about only grades and money (sad-ikr). Kang Yeon Doo has neither. Her mother cannot afford to give money to the school and she is also 198th out of 200 fir grades. However she is the leader of Real King, the schools dance club that clashes with the White Tigers, the school’s academic club where only the top 5% of the school can attend (i.e. obnoxious kids) led by the number one student of the school Kim Yeol. What happens when both opposite groups are forced to form a cheerleading team together? The prestigious White Tigers with the poor real kings? YOU CAN NOT MISS THAT!

My Opinion: This show is wonderful as it sometimes made me feel disgust and other times made butterflies erupt in my stomach. Disgust as in what an horrible school (who don’t give a crap about the real kings) and butterflies as in the romance between Yeon Doo and Kim Yeol. Its incredible cute. Ooh and also for Ji Soo who was also Go Bok Dong in Angry Mom. This his second big role and let me just tell you his acting is amazing as he just makes you fall in love with both his characters.

Synopsis: Choi In Ha has a syndrome. Pinocchio Syndrome. Where whenever she lies she starts to hiccup continuously. However her dream is to become a reporter. She is continuously declined because of her syndrome as reporters lie. Eventually she is accepted as a rookie journalist with her college Choi Dal Po who, despite having a shabby appearance and attitude, is actually extremely intelligent. They both work together with also a wealthy heir, Seo Bum Jo, and fangirl, Cha Hye Seung. Together, they try to discover justice as well as themselves in the process.

My Opinion: An Amazing drama about righteousness. This shows how cruel the world can be. Someone destroys an innocent persons live and doesn’t even blink twice about it. That really makes you think about life. It makes you think how people should be me more responsible and think before doing something. I obviously watched this drama for the one and only LEE JONG SUK. His acting was amazing as well as hilarious.

5. Birth of a beauty

Synopsis: the drama revolves around, Sa Geum Ran, a married obese women. She is treated terribly by her in-laws and she rarely gets to see her husband. However she is till cheerful and loves her husband whilst also cleaning and feeding her in-laws. This all changes when suddenly he asks for a divorce as he wants to marry someone else. Heartbroken, Geum Ran run away to find Han Tae Hee, the heir of a large company. He is suffering from a broken heart. To get the women he loves back, he changes her from an unattractive overweight Geum Ran to an extremely beautiful women, Sa Ra. Will Tae Hee fall for this attractive women and will this Sa Ra seek for vengeance?

My Opinion: let me just let you know that the first episode is exceptionally hilarious so WATCH IT! And also if you’ve seen the movie “100 pounds of beauty” it is quite similar to that however its BETTER! I loved this series as the main girl was extremely pretty and while she got her revenge I clapped along with her as I also sympathised with her. The “second” girl was exceptionally despicable and made me hate her SO MUCH! But other than that I LOVED IT.

Synopsis: Sekang High School is the most prestigious private high school in Seoul’s Gangnam District, and Go Eun Byul is the most popular girl there. Meanwhile, her identical twin Lee Eun Bi, who was separated at birth, is living in an orphanage and is being bullied at school resulting to thoughts of suicide. Then one day, Eun Bi loses her memory while Eun Byul mysteriously disappears. Soon after. Eun Bi is then mistaken as being Eun Byul who was missing. Eun Bi then starts living her life as Eun Byul as that is who she thinks she is.

My opinion: The best thing I liked about this was the suspense and mystery. It was so intense and every episode left you with an incredible cliff hanger, Yearning for me to watch more. Unfortunatel ,for me, I was watching it while episodes were coming out weekly and let me tell you, it was ABSOLUTE TORTURE. Also Lee Sungjae from BTOB is staring in this which obviously made me favour this drama even more.

Synopsis: Kim Hye Jin was beautiful as a young girl. The most popular girl in school. JI Sung Joon was a shy, chubby kid who was teased by others. The kind hearted Hye JIn becomes his only friend and protector- they become each other’s first loves. However Sung Joons family immigrated into the United States, leaving Hye jin heartbroken. 15 years later, Hye jin is not as pretty as she was before when her father’s genetic skin and hair conditions kick in. this leaves her with huge frizzy hair and reddish facial scars. She then gets an email to meet Sung joon again but she remembers her appearance and becomes embarrassed. Hye Jin then asks her extremely beautiful best friend, Min Ha Ri, to cover her for one day. But what will happen when Sung Joon, the incredibly handsome and wealthy man, is now her boss as she is suddenly transferred to the magazine department to work as an intern. Will he identify her? Or will she forever be?

MY Opinion: This Drama was totally amazing as it showed you how differently a person could treat you just because of your appearance. Hye Jin was also so loveable as well as kind. However I must Chi Siwon of Super Junior was incredibly humorous; his character was HILARIOUS. I NEVER REALLY LIKED Siwon before but now I LOVE HIM. GUYS, YOU NEED TO WATCH THIS (even though siwon is the second guy 😦 )

Synopsis: Seo Jung Hoo, for reasonable amount of money, may complete any request you have. He goes by the infamous name “healer”. He’s like an errand boy who obliges to any request. He has made many enemies who live for revenge however no one knows who he is behind the mask. With the help of an old, genius hacker women Jung Hoo identity remains hidden. However one of his tasks is connected to one particular girl. Cha Yeong Shin. Yeing Shin is a tabloid reporter who starts to have an interest in this “healer” who tries getting close to her.

My Opinion: I actually found this drama quite humorous however it also had some suspense which intrigued me even more. How is he going to stay hidden? When will he get caught? How will he tell her? Numerous of those kinds of questions rolled through my head throughout the whole series. It was truly amazing.

Synopsis:  the story revolves around a women in her 30s. Jo Kang ja (kim hee sun) who was notorious for fighting when she attended high school. She gave birth to her daughter ah ran in     her late teens and so became more responsible. However when she hears that her innocent daughter is being severally bullied, she does not let it slide. She attends this high school disguised as a teenager seeking for vengeance but what she finds out is true horror.

My Opinion: this story line was quite different as I usually prefer romantic comedy’s however this was completely poles apart from how I’d thought it’d be. I absolutely loved it. When I first read the synopsis, I was completely put off. It was just weird. A mom going to high school? But it wasn’t like that. The plot was incredible as it gave me so many mixed feelings all at once. One minute you felt extremely mad and the next you were smiling like crazy. This show is amazing and I advise every single person reading this to watch it (RIGHT NOW).

So that was my own personal top 10 Korean dramas for 2015. Did you enjoy? if yes please comment below; i would love to hear your thoughts. also if you havent watched any of these dramas i suggest you do so right now as they are AMAZING!

Again thank you for reading!