Emporio Ivankov is not your everyday Okama. He can actually become a woman thanks to his devil fruit abilities that allows him to manipulate hormones. Not only that but he can switch the genders of any individual he wishes. Obviously Naruto has his Sexy no Jutsu but this is no ninja magic trick; this is for reals. Or as it real as it gets in anime…

Ivankov is a one of the commanders of the Revolutionary Army and also the Kambakka Queen. I guess they’re his two official titles. He helped Luffy escape from Impel Down in their failed Ace rescue attempt and travelled with him to Marineford and helping in the Whitebeard War as an ally of Luffy. 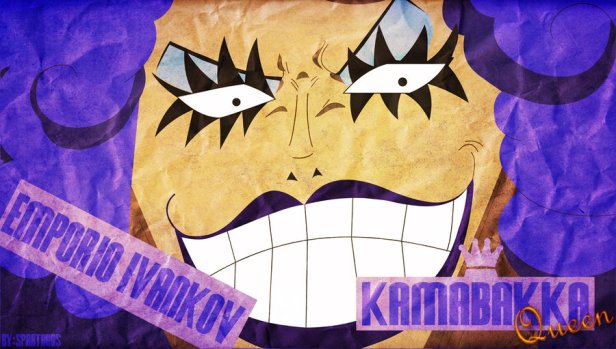 His significance is noteworthy as he is one of Monkey D. Dragon’s closest allies and only remained as a level 5 prisoner in Impel Down as he was simply biding his time, waiting for the moment Dragon would finally strike. His strength can be measured by his amazing ability to stand his ground in the Marineford War Arc with his devastating deathwink an iconic attack technique. Considering he is the one who trained Sanji to further develop his skills, he can be considering a mentor to Sanji.

As a treat to you all, here is an image of the Straw-Hats after they’ve been injected with Ivankov’s hormone replacement therapy.