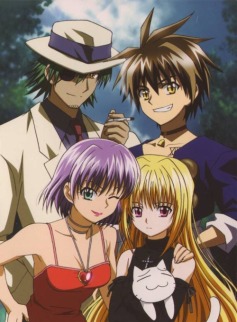 An infamous and extremely talented assassin, Train Heartnet leaves the organisation, Chronos, that he has been a part of since childhood after his parent’s are murdered. Chronos is an organisation bent on world piece. They assassinate anyone and everyone who threatens the peace of the world. Train teams up with Sven. The duo work as sweepers (fancy way of saying bounty hunter). After leaving Chronos, Train declares he shall not take another life. They then team up with Rinslet, a professional thief to investigate an arms dealer’s home and obtain some data. There they meet Eve, a girl that Train had previously been ordered to kill. Eve is a living weapon created by nano technology. Sven decides to free Eve and she joins the duo and works as a sweeper. Together with Sven, Train hunts down bounties while preparing to handle a nemesis from his past, Creed. Unfortunately the team is flat broke which makes for amusing arguments and plot developments. Creed is a former member of the Chronos, like Train and he is obsessed with Train. Creed wants him to join the Apostles of the Stars, a group which he created. The Apostles have various abilities and talents and wish to take control of the world.

Why you should watch it:

Black Cat is an older anime, its first run was in 2005. The ending is slightly rushed and there is no second season but the concept is good and the story is well told. There are multiple plots that do link up. The characters are slightly over characterized but it adds to the anime rather than distracting from it. The anime is drawn well from episode one and the detail remains consistent. This is a must watch especially if you are looking for a short anime that ticks a lot of good boxes. Just to let you know the first few episodes have a couple flashbacks that can get annoying but it is smooth sailing after that.

5 thoughts on “Why You Should Watch: Black Cat”