Jump decided to release the chapter a few days early for those that were suffering from withdrawal. Unfortunately there is bad news at the end of the chapter. There’s going to be another break guys. How are we going to handle this?

CHAPTER 825 – THE WE TIMES COMIC STRIP

Sanji in Wonderland; The Vinsmoke Brothers

I’ll admit the title seems weird and a lot of people thought it was one of those one off chapters that explore something that doesn’t actually follow the main story. They were mistaken as the comic strip they mention is very relevant although the title still put me off.

I guess it is safe to assume now that the ‘Alice in Wonderland’ theory that has been on the books for a while now is coming true. All the cards are in place and we’re having a story/theme based on the fairy tale.

Sanji seems to be our Alice as he is being taken to see the ‘Queen of Hearts’. There are many references here that correspond to ‘Alice in Wonderland’. Let’s have a look shall we?

Now let’s look at the different characters involved that resemble those from ‘Alice in Wonderland’ who could be involved in this plot.

As you can see, there are many references there and many more that I have not mentioned as it is obvious where this is going. I could go into detail about Big Mom’s similarities to the Queen of Hearts considering her short temper and love for desserts. You could even mention how Absalom can disappear much like the C

heshire cat and how there have been many references to him recently. He is even the reason Sanji has ended up where he is. He made the identification. 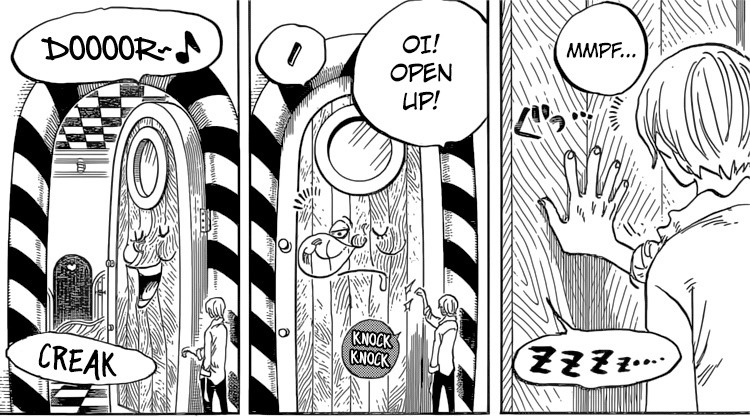 I believe this comic story is very relevant to the plot somehow. Oda wouldn’t randomly add it in there and even base the title of the chapter on such a thing. It was a propaganda comic to promote the marines as heroes and the Germa 66 were seen as the big bad villains. What the Germa 66 did or why the marines required a comic to make them look bad is not known yet but they must have had a reason right? Were the public opinion of marines falling and the Germa 66 seen as heroes amongst parts of the world? Is their opinion now frowned upon due to this comic strip? Vito seems to be a huge fan of the organisation and I believe the Fire-Tanks may only be involved in this due to the Germa 66 alliance that may come out of all of this.

It was interesting to note that the logo used to represent the hero of the story was a combination of the Marine emblem and the Word Government logo. With the seagull on the head of Sora, the protagonist of the comic, I can’t help but feel Sengoku was the basis for Sora. The robot could have been the basis of creating the Pacifista’s or the initial transformation of Kuma into a cyborg.

Sanji is still being a stubborn bastard and refusing to get comfortable and friendly around those that have been charged with bringing him in but they’re treating him like an honourable guest rather than keeping him under key and chain like Caesar Clown.

Vito even stopped on of his crewmates from attacking him after Sanji completely disrespected him. Interesting to note even this new character introduced in Bege’s crew is based off one of the five mafia families.

It wasn’t until the Lola lookalike entered that Gotti calmed down which shows she has more authority over them. This would reaffirm the notion that she is one of Big Mom’s daughters and considering Sanji noted the resemblance, it is safe to assume Lola is definitely Big Mom’s daughter. It also seems Sanji is over Purin’s beauty and is refusing the marriage again. I guess he can calm his nerves when the beauty is not actually visible to him. I still don’t know how this will play out but it seems clear Purin is not happy and Sanji has a duty to every woman to ensure she is not in a position of distress. He will save her but I’m not sure how this will work.

SUNNY ON THE SUNNY

The Strawhats and the Minks are struggling to survive the heatwave with all the food gone. This whole scene was hilarious. I mean just looking at mummified Luffy, Brook talking about becoming a ‘Mummy’ and talks of using Chopper as emergency food source.

And then Luffy getting poisoned; that was hilarious. The whole immunity to poison comes in again to make the fight with Magallen relevant. Otherwise Luffy would have died by eating the poisonous skin of a fish. Chopper in this scene stole the show for me though. He’s there crying that Luffy would die but kept claiming how tasty the fish was.

Also, the whole don’t go into the light situation with Luffy was too funny. I was in stitches reading this chapter.

Unfortunately, the theory with the Yuki Yuki no Mi and the oranges never came into play. This was the perfect opportunity but it wasn’t to be. I guess Monet being alive is more plausible now.

The Sunny finally enters Big Mom’s territory and Chopper’s eyes light up at the cotton-candy snow that has just started landing upon them. Pekoms has the stupid idea of disguising the Strawhats, despite the fact it is obvious from their ship that they’re the Strawhat Pirates.

With the amazing technology of underwater motion detector snails, the Strawhats were detected immediately; so much for sneaking in. The greatest thing about this whole situation was the fact it wasn’t Big Mom who intercepts them but the Germa 66 and we get to see the first of the Vinsmokes. I am assuming this is a brother of Sanji. I mean the resembelance and the curly eye-brow gave it away, although we only see the one.

Now whether he’s Ichiji, Neji or Yoji… only time will tell but he seems quite young so a similar age to Sanji I would say. It will be hilarious should Luffy and Chopper mistake him for Sanji. Fortunately Nami will figure it out.

Interesting to note, the whole ship is a huge den-den mushi. I wonder what it is capable of. 3 thoughts on “Sanji in Wonderland; The Vinsmoke Brothers – One Piece 825 Review”