With the newest iteration of RWBY, RWBY Chibi this series is focused on more of the humor and less of the dark tones of the original series, it’s a comedic short style of series with a brand new design with every character turned into a lovable Chibi version of themselves. The designer of the series rooster teeth went for a more comedy focused series like they are used to doing with Red vs Blue and the like.

The first episode really is an interesting one, though I will give readers 5-10 minutes to watch/rewatch the episode again as it’s only 3 and a half minutes long for episode 1. Sponsors of Rooster Teeth got to watch it yesterday on its premiere date May 7th, 2016 and it is available for all members of the site as of today May 8th, 2016 with that out-of-the-way, SPOILER ALERT! Readers can continue to read at their own discretion

With the very first short we see, we see young Ruby Rose trying to bake her favorite snack, cookies, however failing to do so she takes her anger out on it by merely devouring the massive sugary chocolate chips in a fit of sugary goodness. Ultimately succeeding somewhat with her endeavour she has a giant cookie but a small glass of milk, leading to one of the more funnier moments of the episode seen here. 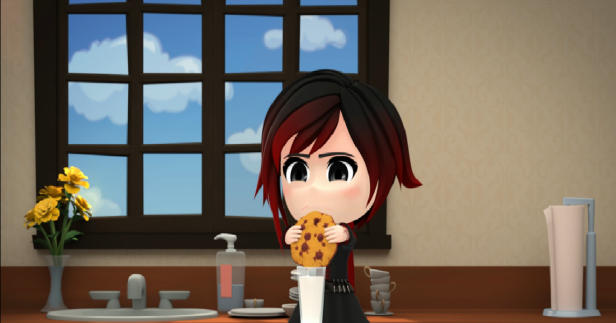 Once this skit is finished we see Weiss practicing her pin the tail on the donkey skills with Myrtenaster her weapon of choice in the series blindfolded but failing to do so. Another cut later we’re seeing ruby sneak into Blake‘s room, taking a look at her book entitled “Ninjas and Love” seen here 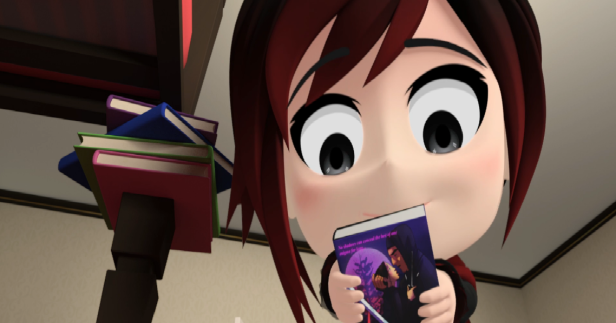 Reading this book she somehow admires the Katana insert fold inside the book which leads us to the final cuts of the episode leading to Weiss and Yang training in the courtyard, but having no luck in the process. The episode abruptly ends with Blake looking for her book, but finding Ruby reading it, even getting smacked by her own book, while Ruby is reading the what she calls “Trashiest novel ever” and that’s the end of the episode.

Honestly I thought it was just humorous enough to present a good chuckle, you have the right mix of comedy, good skits and even a decent looking environment to present it in, I have to give RWBY Chibi Episode 1 and solid 8 out of 10, it’s a good start to a comedy series no issues here, but needs a tad more of that Rooster Teeth flair we are prone to see in a series of this caliber.

Anyways, enjoy episode 1 of the series folks, we’ll see you for the review of Episode 2, which should premier next week on the main site. Thanks for reading this is Vergil signing off.