OATHBREAKER– A GAME OF THRONES REVIEW

A GOD AMONGST MEN

So Jon Snow is back and he doesn’t seem to be fully himself at the moment. There was a lot of concern whether he will be his true self upon returning and although he looks and seems to be the same old Jon Snow who we all love. The Red Woman even asked him what he remembers. He recalls Ollie stabbing him in the heart both literally and metaphorically but he says then there was nothing.

Melisandre seems to think he’s her ‘prince’ now that Stannis is gone. Possible hints at Azor Ahai. Jon however knows nothing, as expected.

Tormund is the first to greet him after Davos guides him up and gets him his Commander of the Nights Watch gear. It seems the men see him as some sort of God now considering he was completely dead and has come to save them. 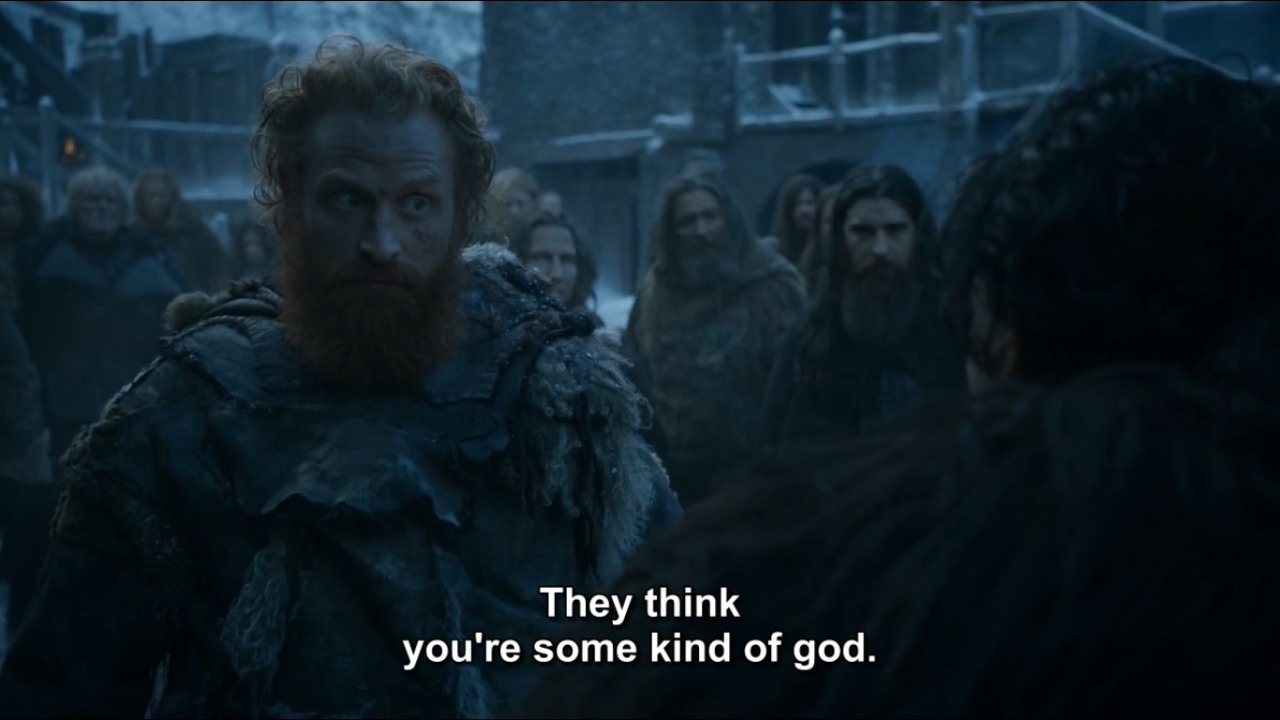 I love how Tormund still treats him like a friend and makes a joke about his small package. The rest of the Wildlings and Nights Watch stared at him in awe as he hanged the traitors who stabbed him. I have to admit Ser Aliser Thorne is cool despite what he did considering he said he would do it all the same considering that Jon united the Wildlings with the Nights Watch as he sees that as betrayal. Ollie however remained quiet handing Jon that cold stare; the stare of a boy who has nothing but hatred. Good riddance I say; that’s for Ygritte!

Speaking of good riddance, Jon took his coat off and handed it over to Edd claiming his ‘Watch has ended’. Funny how he kept the sword from the previous Lord Commander; I’d thought he’d leave it all behind. Jon might know the importance of Valerian Steel. Did I just use the word ‘know’?

Well Maester Aemon did say kill the boy, let the man be born. Well, he both killed Ollie and resurrected after death so I think it’s safe to assume the boy is dead and the man is born. Perhaps the man knows somethings the boy didn’t.

I guess Oathbreaker, the title of the episode, refers to Jon Snow. I mean him leaving the Night’s Watch is an oath broken in a sense although he did die and I’m sure your watch ends when you die. Either way… It’s done!

EVERYBODY NEEDS A SAM!

As we have seen with Carly Shae, Dean Winchester and Frodo Baggins; you need a Sam by your side to be successful. Jon needs his Sam and unfortunately for him, Sam is taking his lovely lady and the son who was named after him but he didn’t father, across the see to his mom. Apparently his mom is cool despite the fact she let his dad send him away to join the Night’s Watch. Considering the other option was an accident on a hunting trip (we’ve seen that before right?), I guess it wasn’t the worst that could have happened.

Unfortunately for Sam he suffers from sea-sickness, as if he couldn’t be any lamer. His girlfriend from beyond the wall doesn’t want to leave his side but considering he’s going to the citadel to become a maester, where no women are not allowed, he has no choice but to leave her side for now. Considering how people are dropping like flies right now, I don’t think they’ll see each other again. We know the kind of bastards the writers can be.

THE GIRL HAS NO NAME!

Arya The girl who has no name’s training is going pretty well I must say. She can now fight blind using a stick (Daredevil anyone?), has lost the ability to speak in first person and no longer wants to kill the Hound. Oh wait, he’s already dead but he was off her list.

The one’s that remain are Walder Frey, Cersei and The Mountain. I wonder how she remembers considering she no longer calls their names out at night before she sleeps. Well I’m assuming she doesn’t as she no longer has a name and is no longer Arya Stark.

Well the faceless man doesn’t seem to care anyway and therefore gives her the water from the well that kills people but gives her eyesight back. What was the point of the blind training then?

This was one of the best scenes this episode. A representative of House Umber walked in and was a total badass. Refused to swear allegiance to Ramsay, insulted his dead dad and even called the Karstarks paedophiles; to their face!

Like I said a total badass… but he doesn’t seem to be happy about Jon Snow allowing the Wildlings through the wall. Looks like word has spread and they want Ramsay to stop the Wildlings coming through.

Remember Osha, the scruffy looking wildling who was looking after Bran and Rickon? She was tasked with taking Rickon to one of the houses that was sworn to House Stark. That loyal house was of the Umbers and now they’ve gifted the youngest Stark to Ramsay. 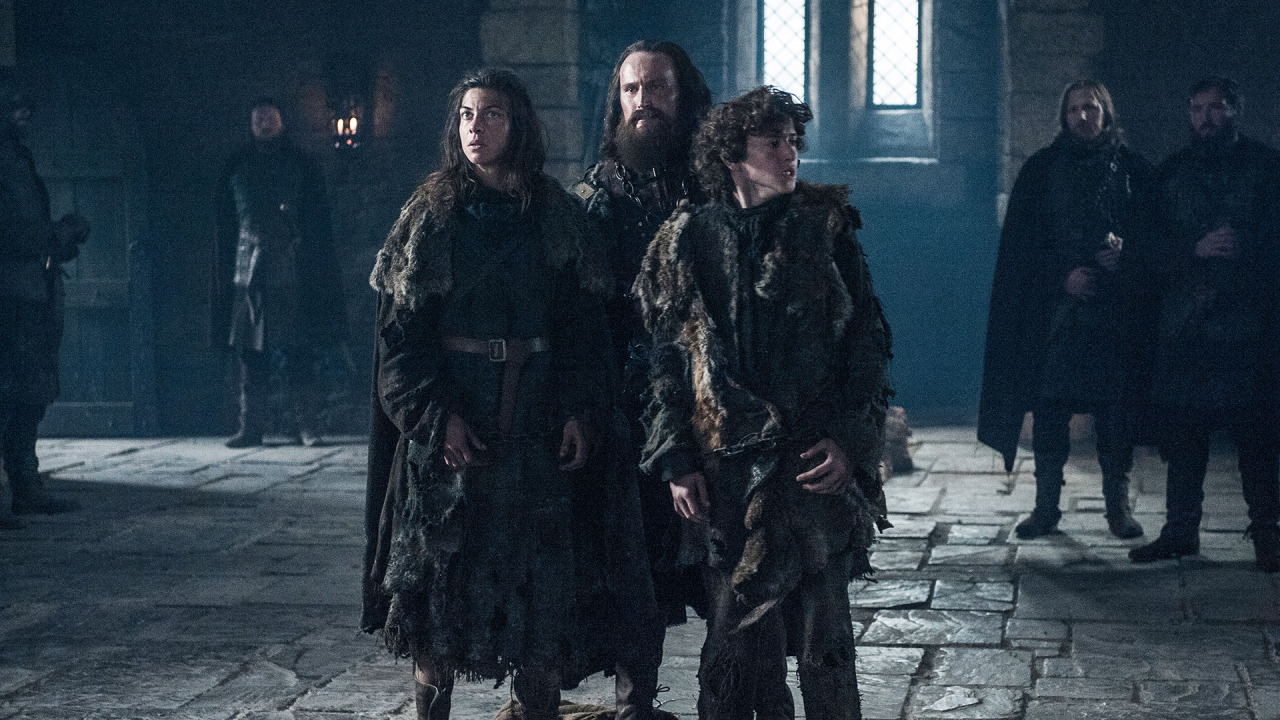 This could be a reference to the title once again as the Umber’s seem to have broken their oath to serve the Starks. Looks like loyalty is getting very fickle these days.

Either Ramsay will use him in some way to put himself on top of the North or will complete fuck things up here. Maybe he will say to make amends to the North; he will place Rickon in charge of Winterfell and control things that way. He might just chop of Rickon’s dick and send it to Jon. That would end the Stark lineage I believe considering Bran is a cripple.

The final option would be to force the North to bend to his will or have their beloved Stark boy killed. Jon and Sansa would both drop their holds on the North in order to protect Rickon.

Why do they have to kill the Direwolves though? Like, they’re so cool. Only three are left now, although Nymeria is missing at the moment so we only get to see two.

There may be some hope though. Many believe the Umber’s are way too loyal to the Starks to betray them and are instead playing Ramsay. The direwolf was a fake as the head is way too small apparently and they’re just trying to stab Ramsay in the back by drawing him in with a false gift. He’s going to die sooner or later; I can tell that much, it will be interesting to see how though.

It is commonly known amongst the theorists that Jon Snow is the child of Lyanna Stark and Rhaegar Targaryen. Bran gets to explore this theory as he takes another trip to the past where he witnesses the young Ned Stark along with Howland Reed and group take on Ser Arthur Dayne. They get their asses handed to them. Looks like Ned told more than one lie then about that night as it was Howland Reed who stabbed ‘The Sword of the Morning’ in the back in order to defeat him.

This proves the theories that Ser Arthur Dayne is still alive although things may differ in the books from the plot here onwards. It would be disappointing if that’s the way it went down and Ned defeated Dayne in such a dishonourable fashion.

They also butchered the fact he fights with a two-handed sword which he is famous for as it was forged with a dawn star-… Ah who the hell cares. The fight scene was pretty damn cool.

We hear Lyanna cry out in the ‘Tower of Joy’ but the Three-Eyed-Raven stops both Bran and the audience right there. That was more than enough of the tease for the day I guess.

Either way, it gives more strength to the theory about Jon and Bran is probably the one who will learn the truth but what got me was the fact Ned heard Bran’s voice somehow. Can Bran alter the past with his meddling? That will be interesting.

We got to see into how Varys operates as he interrogates the woman who was getting the Second Sons and Unsullied killed with her brothel. He uses techniques such as subtle threats and then promises of safety in order to obtain the information he requires.

So we’ve heard about Varys and his birds all this time. It seems his birds are simply little orphans who were going around and picking up all the rumours from all around the world, feeding them back to him. Nobody pays attention to kids and because he looked out for them, they were loyal.

Well it seems they belong to Cersei now thanks to that creepy physician she seems to trust now. It might mean she gets her power back if she can stay a few steps ahead with this new tactic.

Ollena Tyrell is back and is working on getting the Marjory out of prison. The whole council totally dismisses the Lannister twins and refuse to work with them. This is very interesting. Even their own uncle doesn’t listen to them and walk out as the two attempted to be a part of the council. This is some interesting politics but all I care about is having Marjory out.

We haven’t seen Little Finger for a while but I believe he will have some part to all of this somehow. He’s probably just waiting for the right moment to pick his side.

Tommen tried to go and confront the high sparrow but the poor lad got brainwashed instead. It is so funny watching the kid try and fail again and again. It must be so frustrating. Sometimes you wish he was more like his brother; just sometimes.

I’ll end it on how awesome Tyrion is because let’s face it, he’s awesome. That quote just stole the episode for me. It was just so epic-ly executed.

It was funny how he brought up that Missandei knows 18 languages yet struggles to hold an interesting conversation in any.

He does mention some stuff about Astrapor, Yunkai and Vallantis; the three foreign countries who are supporting the sons of harpies. That’s messed up. They are at such a disadvantage without Khaleesi and her dragons.

A good episode in terms of development although it wasn’t particularly exciting I would say. Jon leaving the Night’s Watch was a vital point and Ollie dying was very satisfying. A shame about Rickon getting caught in all of this but he seems to have grown quite a bit as well. There’s not much hope in the Starks being reunited is there? Not unless Jon pulls some heavy work. Where next for Jon? Who knows…

4 thoughts on “Where to next for Jon Snow?”