I know this is coming up very late and I don’t really have an excuse; just been super busy. We have had two great chapters these recent weeks and there is a lot to talk about before the next chapter is released.

The man that they mistook for Sanji was obviously not Sanji. He wasn’t even Ichiji and Neiji as it was assumed Sanji’s elder brothers names would be as he wasn’t the elder brother of the Straw-Hat cook at all but the younger brother; hence the name Yonji. Now the first thing I noticed about this guy, apart from the obvious likeness to Sanji was his shitty attitude. Zoro would think Sanji a saint compared to this guy. I mean he’s just as bad as Sanji when it comes to perverted behaviour; was onto Nami’s beauty without a second wasted. Where we had Sanji not caring who Gin was when offering him food, we have Yonji refusing to help Luffy for no reason apart from spite. 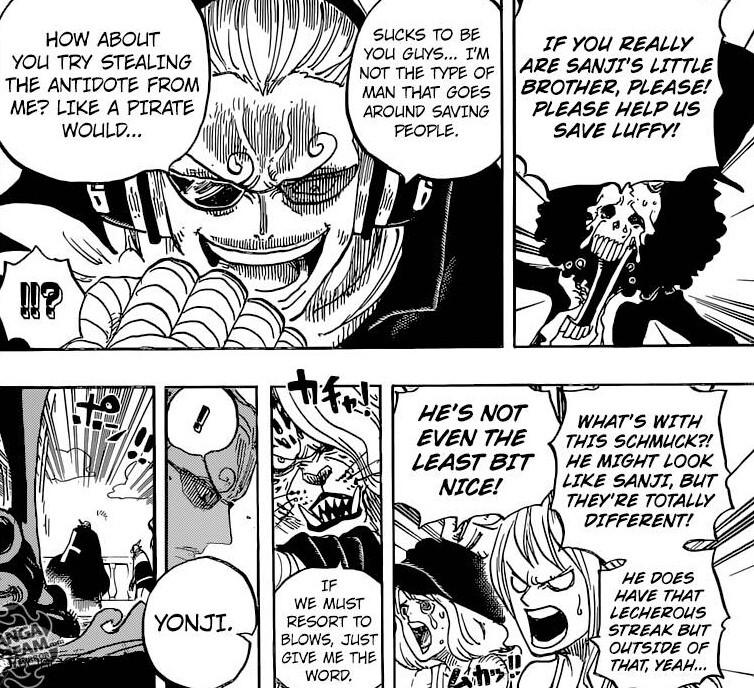 Going with the number theme again, Reiju is the sister of Sanji and is represented by the number 0. She has a peculiar moth outfit which people were quick to note upon that Sanji has shown his fear of moths in the Jaya arc. This may very well have something to do with his elder sister. 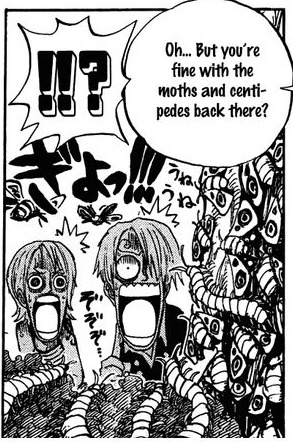 This is what the title of the chapter 4 & 0 was referring to; Sanji’s siblings. I am expecting future chapters to be titled 1, 2 and 3 or in some reference to them.

Reiju has a higher authority than her younger brother which makes a lot of sense and she decided to help Luffy but it seems it was more the delicacy of her own perverted nature than anything else. She wasn’t willing to offer any other help to the Straw-Hats.

She has some sort of Devil Fruit that allowed her to recognize and suck out the poison from Luffy. There was a moment where the words Gyu-ru-ru-ru appeared around her. I don’t know what that means but it might have something to do with her devil fruit. It could be called the GyuRu-GyuRu Fruit. 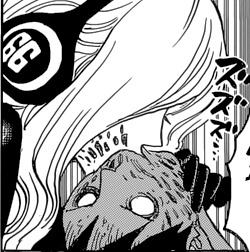 WHAT THE VINSMOKES ARE ABOUT?

A point to note is that they recognised the Straw-Hat ship immediately so they’ve done their research. Secondly, they didn’t want to harm their relationship with Pekom’s who is a representative of Big Mom and decided not to report the incident. This shows that the marriage alliance is just as important to them as it is for Big Mom.

What are these guys about though still remains a mystery although some more information was revealed. Th 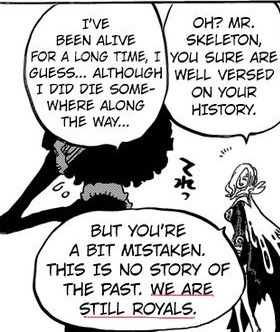 Yet they can form alliances publicly with a Yonku like Big Mom and offer the use of their technology. You see that’s what they are apparently famous for; their advanced technology. If you noticed the shoes the siblings wore; they were very powerful. They could jump high into the air with a single push of their feet, which reminded me of the Sky Walk that Sanji has learnt to use.

Another thing of note was the code names they used for themselves; Yonji is Winch Green and Reiju is Poison Pink, much like Sanji’s Black Leg. Will we have a Blue, Yellow and Red as well? A whole Power Rangers theme going on?

Just when you thought there can’t anything more to add to this chapter and out pops Aladin swimming beneath the ocean, ready to report the whereabouts of the Strawhats to Jinbei. Now as you should be aware by now, Jinbei has a deal in principal to join the Strawhats once he has sorted his current problems out.

One of those problems is that he is currently allied with Big Mom. Now to what purpose I’m not sure but I have a strong feeling Jinbei will try to stop Luffy and it’s going to get ugly this time. 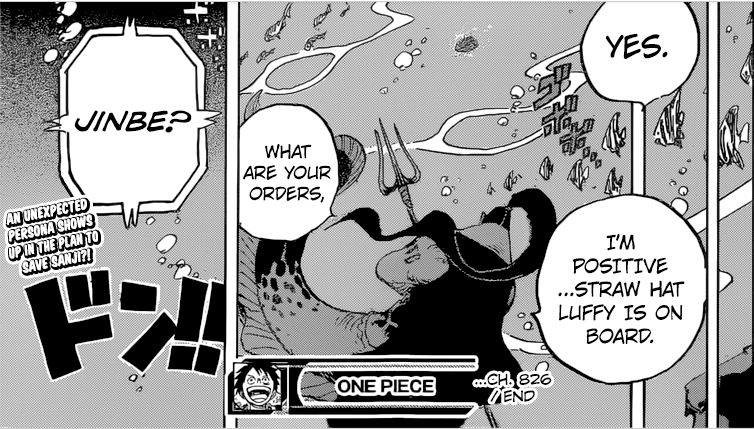 So apparently Whole Cake Island is surrounded by several smaller islands creating a utopia of islands. Big Mom doesn’t seem so bad if you consider her thoughts of creating lands where there is no discrimination of races as minks, fishmen, humans etc. all live in harmony together. But at the same time, things don’t seem to be as straight forward as it is claimed. There is something hugely off about Charlotte Linlin.

The island the Strawhats arrive on is the Chocolate Island where everything is made of chocolate. Willy Wonka’s chocolate factory anyone? They are allowed to eat anything they like except for buildings and roofs as this will obviously disrupt someone’s life as they’ll have no roof over their heads, literally.

The Strawhats meet Purin although they don’t know who she is yet and they all get on really well despite the fact Luffy and Chopper ate her building. They were on the verge of getting arrested had she not spoke up for them claiming she required the building taking down. It was all thanks for Luffy’s ridiculous excuse of it tasting so good it had to be eaten.

I guess she is a cook too considering she made the building. Maybe she will make a great match for Sanji in just that aspect alone. WHAT’S UP WITH PEDRO?

Now I know everybody keeps stating how fishy Pedro looks and that he is up to something but I wanted to give him the benefit of the doubt. Now we know for certain there is something going on. A mink on the island recognised Pedro as a high authority figure and apparently they’ve got something planned and Pedro is the one leading it.

Was he a pirate as the hyena called his Captain? Clearly he has left Zou before and has a reputation outside the mink island. I have no idea what it is exactly but I’m sure it won’t be good. He may betray the minks and the Strawhats in some possible way and it maybe he only tagged along this trip to carry his own plans out. I’m hoping we have misunderstood and his plan is for the benefit of the minks but his shady looks are not really helping at all.

He did state that the hyena not mention his arrival to anyone as he’s here on vacation and he even told Carrot he’d fill her in on it later so maybe not all is bad but I still have a bad feeling. We get to see Big Mom dancing around excited about Luffy’s arrival to the party. It seems she only cares about the Strawhats’s arriving on the island and accepting the invitation. She wants everything to go as planned and the whole thing looks like a scene from a Disney movie. She reminds me of the Queen of Hearts and the singing and dancing objects around her is a bit too much for me. I did not envision Big Mom like this. She seems really jolly and fun, like an old aunt or something. However she’s got her high-rank officers raiding islands in huge amounts for ingredients; like whole islands are being plundered for flour. Is that how she creates her islands, by bringing in tonnes and tonnes of the stuff to make them?

I noticed one of her allies on an island had what seems to be a named blade from the design of it and she seems female. A female swordswoman as a potential battle for Zoro is what has interested me the most. Can’t wait to see how that works out. I’m hoping Zoro gets to face her at some point considering he’s not going to be on the island in this arc.

Not an amazing chapter but not bad either. It was a fun chapter more than anything else and the Pedro reveal did grab my attention. Let’s see what Oda has in store for us for chapter 828.