It’s been a while since I’ve done one of these. Blame it on writer’s block or life getting in the way. Either way, I still impatiently wait upon the latest One Piece chapter every week so I don’t see why the hell I shouldn’t write my thoughts down.

CHAPTER 842 – THE POWER OF FULLNESS

THE ORIGINS OF THE GENTLEMAN

For as long as I’ve been reading One Piece, there have been several theories as to why Sanji refuses to ever strike a woman. Even in the dire moments where the team were battling to rescue Robin, Sanji was willing to be defeated by Kalifa of Cipher Pol 9 than to fight back. Then again at Dressrosa, when he learnt of Viola’s affiliation to Doflamingo, he allowed her to defeat him.

Many thought it had something to do with his mother. Now his mother had never been mentioned until recently but up until then, we thought he became a gentleman because of his mother. Or perhaps his abusive father was the reason and he decided he would never stoop so low.

Little did we know it was the crazy foul-mouthed cook who became Sanji’s adopted father that taught him as a young boy that if he were to ever hit a girl, he would kill Sanji and then kill himself for raising such a shitty lad. Zeff’s words really touched me and we finally know the truth behind Sanji’s handicap. Zeff was the father Sanji never had and the respect he has for his old man is worthy of praise.

The situation reminds me of Ace and his love for Whitebeard despite him not being his biological father. If One Piece has taught me one thing, it is that family doesn’t have to be blood related.

We haven’t seen what Brook and Pedro are up to but Chopper and Carrot are trapped in the parallel universe in the world of mirrors. They’re causing quite a ruckus. Brulee is hunting them down depicting the Grim Reaper across a checkboard floor whilst the two are carrying the ankle weights around with them avoiding their ‘Fate’.

This is quite hilarious actually but they’ve managed to end up exactly where they’re supposed to be, in the capital; “Sweet City”.

The guy who referred to Chopper as a Racoon/Dog creature cracked me up. Speaking of cracking… 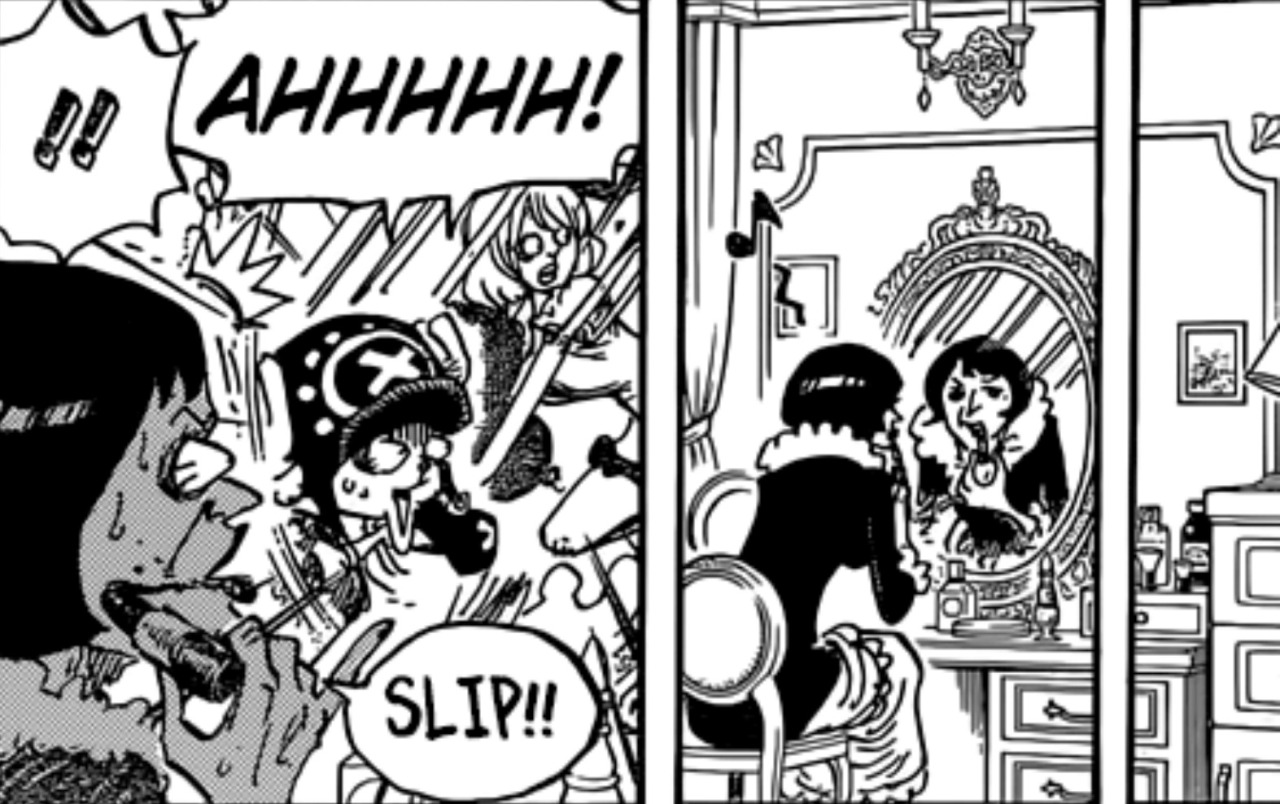 This battle is slightly dragging out as we want Luffy to move on but make no mistake, this is a huge battle. Luffy is up against one of the most powerful devil fruit users in the world; a yonku executive. Cracker has a bounty of 800,000,000. That’s almost a billion and the second highest we’ve come across so far.

This guy is such a beast; even his devil fruit poster hasn’t captured his true form. His ability is over-powered and only someone with Luffy’s capacity can defeat him and by capacity I mean Luffy’s stomach capacity.

I’ve got to say, Nami was really useful in this situation. I guess the Big Mom vivre card is a hella-useful here but despite that, Nami is making it rain… literally. I know the others have said it before but Nami stepping up and claiming Luffy will become the Pirate King sent a chill down my spine. It gets me everytime. 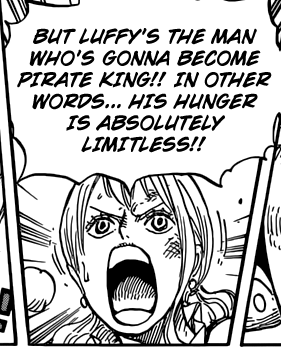 Cracker is totally out of ideas considering Luffy can eat up anything he conjures up thanks to Nami softening the biscuits. And it didn’t end there with Luffy going Gear 4th into Tank-Man and absorbing Cracker before cannonballing him away.

This was remarkable and Luffy’s battle genius shined out once again. He is getting the grasp of Gear 4th’s abilities and using them a lot better. I mean it was only possible because he’d consumed so much and expanded his body so large but what power it possesses. It was almost like Kuma’s paw attack. I wonder where Cracker will end up. It would be really cool if he literally crashes the wedding/tea-party. I mean it would be fitting to have biscuits at a tea-party right? I love how Reiju is showing him sisterly love despite claiming it is his own fault. She did help him escape in the first place and she doesn’t feel she owes his anything anymore and to be fair, she did do a lot for him. However, I don’t think it will end there. There’s more to this sibling tale. A lot more. You see him mending his face this chapter using some amazing piece of technology. Sanji is well impressed with it and rightly so. Although it doesn’t get rid of the injuries as the pain would remain, it does give it the appearance of not showing the damage. At least it keeps my boy pretty if not anything else.

However things aren’t looking good. The call has been made for Sanji to make his way. I feel like this is it. Sanji’s days as a ‘wannabe’ Casanova are coming to an end. He’s about to get hitched. Can Luffy save him in some way? Just what the hell is going to go down this arc?

Overall it was a decent chapter but the focus point has to be Luffy defeating Cracker with such an impressive turn-around. I didn’t see how Luffy could get past such an opponent considering his Devil-Fruit abilities didn’t seem as strong in comparison but the Gum-Gum dude always has tricks up his stomach.