OK, I’m freaking out here. What the fudge? Is this really about to happen? Luffy finally meets Sanji after all these years. Well technically it’s only been a matter of weeks. 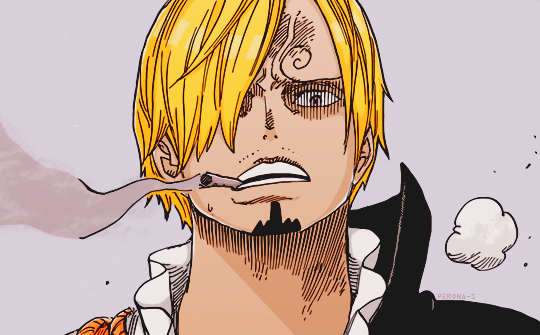 So the chapter started with Cracker showing up defeated at Wholecake Island. This is shocking. He is one of the top three executives and he’s been defeated already. I mean think about how long it took to take down Doflamingo’s executives. I’m not saying Cracker was weak by any shot but Luffy was taking on a commander and this is exactly what happens in such circumstances.

Do you remember Blueno? Luffy easily disposed of Blueno before the fight against the CP9 actually began whereas the rest had trouble against the lesser members as Luffy took down Rob Lucci. This was proven once again in Dressrosa as Luffy defeated Doflamingo.

It kinda shows despite what anybody says Luffy is ahead of his compatriots by a long shot when it comes to fighting. I guess where he lacks in brains he makes up for in fighting. Luffy just doesn’t give up.

How CUTE is Nami though?

What I really love about this arc is the cool names of all of Big Mom’s children. They’re all named after food and I can’t get enough of it. The names of the final two commanders are revealed as Lord Katakuri (Potato Starch) and Lord Smoothie. I guess the names will go hand in hand with their abilities considering Cracker was a “Biscuit Man”.

Smoothie could be some sort slippery dude that could be difficult to attack. I can only imagine so considering he would have an ability that would be on par at least with Cracker. Katakuri could also be very interesting. I guess we will just have to see.

I still don’t see the Straw-Hats actually taking on Big Mom as of yet despite Luffy defeating Cracker. Now I would really like to see what kind of strength the other Commanders hold and the one that was defeated by Urouge. I mean it was mentioned how Cracker was once defeated before but clearly he’s recovered unlike the one Urouge defeated.

Now it was mentioned how the one who previously defeated Cracker received the full wrath of Big Mom’s powers and apparently she can control the weather. 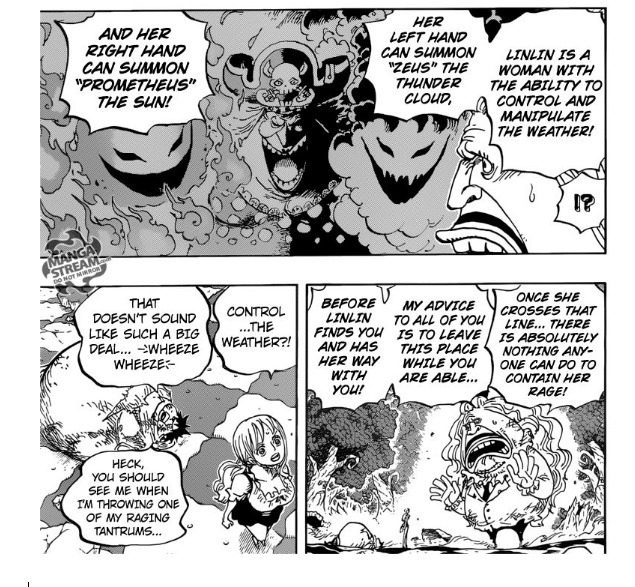 Like what the actual fuck? Is she for real? I mean I guess she’s a Yonkou and all. I mean out of the other four who’ve had that position; one of them could destroy the world and was considered the strongest man in the world. The other is practically immortal as far as we know. The  third can absorb multiple devil fruit abilities and the final guy is a badass enough to show up at a war and end it by threatening the World Government.

Okay, we still don’t know much about Shanks but by these standards, Big Mom gotta have more than just pregnancies and badass soul sucking devil fruit ability that allows her to animate inanimate stuff.

I guess she simply animates the cloud and sun that follows her around and they have an evil side behind those colourful cartoony smiles.

Now this was a crazy crazy moment. The moment we’ve been waiting for ever since Sanji got dragged away. You see Sanji and Luffy had only united for a few days after 2 years of which they spent most of it apart due to the shit that went on. I mean Fishman Island followed by Punk Hazard and then Dressrosa. Not to mention Zou that was meant to be the safe haven where they were supposed to meet after the storm.

Well Luffy was glad to see Sanji, really glad and he was rambling like he normally does when he’s happy. This is where Luffy is at his charming best and you just want Sanji to dive into his arms… awkward silence ahem… What I meant was like bump fists or something. I’m totally not having a fantasy yaoi Sanji x Luffy moments here. That was totally random. Well Luffy was all happy and so is Nami. I mean just their luck that they’ve found him in time and they can finally rescue him and get out of this place without even having to run into Big Mom. It’s all well and good on their side but the look on Sanji’s face says it all.

The last thing he wants or needs is Luffy and Nami showing up here. Like if there was to be a wedding, they would be the Best Man and the Bride but this was totally not that situation. Sanji’s expression is mixed with shock, horror and utter dismay. Like can my luck get any worse, this situation is fucked up. You see Sanji had expected to be able to get out of this situation on his own and return to the group as he had promised. He thought it was a little blimp and didn’t want Luffy and the gang to ever have to go out of the way. Now, with the hostage situation on Zeff and the Baratie, Sanji knows he has no choice but to be part of whatever his father and Big Mom have planned.

He has to sacrifice his life in order to save everything he loves. He knows how dangerous both of these parties are and the last thing he wants is to have to carry the guilt. Luffy, Nami, Zeff and everybody else who were ever associated with him would have to pay if he was to back out of this. He has to protect them the only way he knows how; to become the jerk he was always supposed to be. 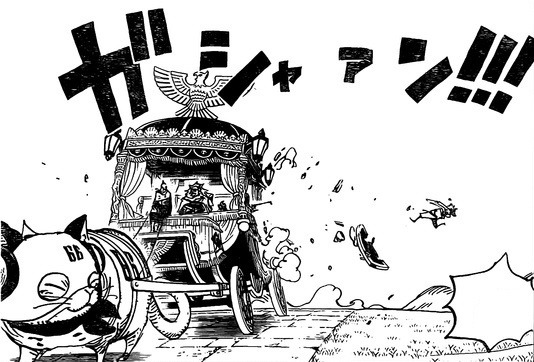 To this moment, it still sends shivers down my back, the look Sanji feigned as he kicked Luffy and the look his captain returned to him. I seriously cannot tell you how freaking awed and upset I am by the happenings of this chapter.

On the one hand we have Sanji vs Luffy happening for real and on the other hand, we have a fight amongst the best of friends about to begin where both are fighting out of love for each other. This moment is so precious I feel like crying. 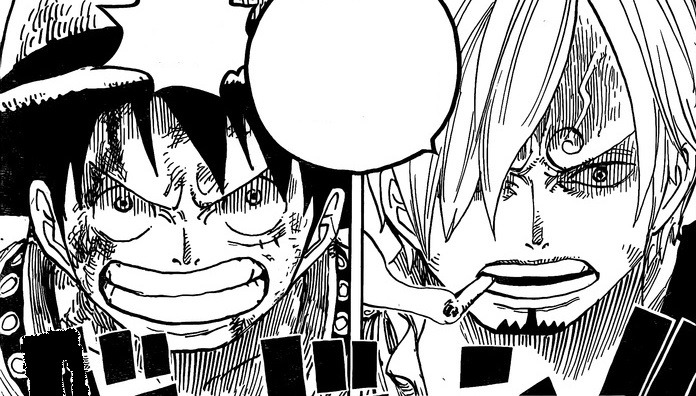 But the face Nami made almost made me cry. What makes it worse was that Luffy actually said that Sanji would never speak to them like that in Chapter 837 as he took on Cracker so it would hurt him harder that he doesn’t even know his own friend. 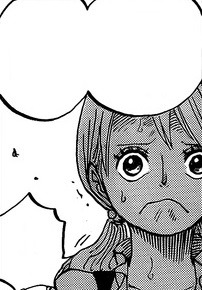 I guess Sanji had to say what he said but it just hurts so much having to experience it through Luffy and Nami. Zoro would have straight up cut him to pieces. He don’t take shit but perhaps he would have seen through it like he did when Luffy ordered him not to fight back against Bellamy. Where’s Zoro when you need him? I don’t want to end things on such a sad point so I’ll leave this picture of Sanji’s brother’s reaction to Nami that I had predicted several chapters ago. I guess some things are genetic. 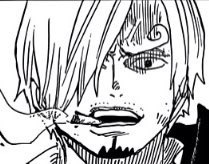 But to be noted, what the hell is up with Sanji’s eyebrow switch? I don’t think Oda would make a mistake so must be significant but damn!

I’ll be honest. I did not see that coming although it should have been a bit obvious at this stage. I guess it’s a situation only Luffy can solve with his whole, “I refuse your refusal” attitude. Overall a “Cracking” chapter… (See what I did there?)